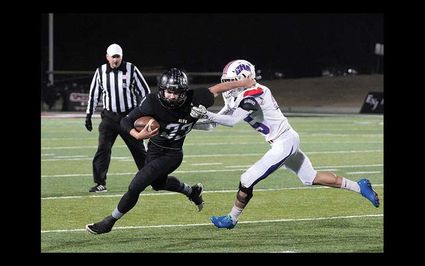 Goldbug Dalton Hess carries the ball while warding off an Adair player in last Friday's victory over Adair.

The Class 2A football semifinal matchup of Alva against Millwood may seem like a David and Goliath contest, but we know who won the latter one. Alva Coach Taylor Schwerdtfeger isn't exactly shaking in his boots.

"We love being counted out," he said. "We love people to say we don't have a chance because I'm here to tell you right now, our kids are going to show up and play. They're going to play hard."

Alva is coming off a big win against Adair in the quarterfinals 40-8. The team set a new school record of 12 wins in season. This year's seniors remember when the Goldbugs won only one game du...