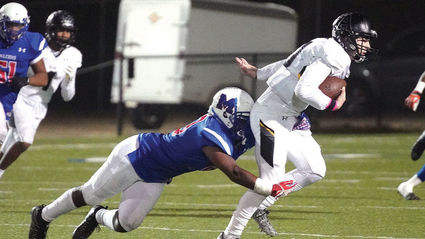 Goldbug quarterback Junior Mitchell Meyer (10) is grabbed from behind by Millwood's William Shells. Meyer had a good game, but missed a couple of plays after hard hits.

Alva fans would have loved to see the underdog Goldbugs pull out a win against No. 1-ranked Millwood Saturday night, but it was not to be. Millwood won 37-0 at the neutral site of Enid High School.

Although it was a shutout, Alva kept the Falcons under 40 points, something that hadn't happened in any of the three preceding playoff games. Millwood scored 63 against Tonkawa, 42 against Dibble and 44 against Vian.

This was only the second trip to the football semifinals for Alva. The last time was in 1949 when Alva lost a semifinal game to Wynnewood in Class B. The 2017 Goldbugs set a new sch...