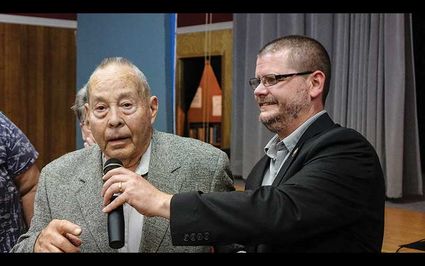 January 2017: The final event of the Chamber of Commerce Gala evening was naming Wayne Kinzie as citizen of the year. Mayor Kelly Parker, right, holds the microphone as Kinzie expresses his appreciation.

In the first months of 2017, Alva began to plan for upgrading the water supply system. There was competition for several Alva City Council seats. Wildfires broke out in counties to the west, and local firefighters went to assist. Several longtime residents passed away. Basketball season came to a close as spring sports began.

Here's a look at the first three months of 2017 from Alva Review-Courier reports:

The Austin and Marlo Smith home in Freedom was totally destroyed by fire the morning of Jan. 6, 2017.