No. 10 Ladybugs battle for consolation championship 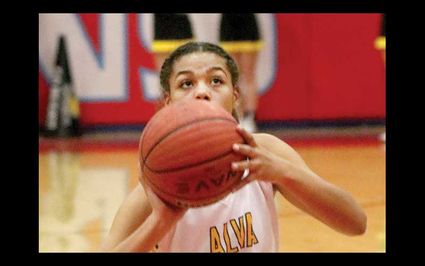 ENID, Okla. – The Alva Ladybugs rebounded after an opening round loss at the Wheat Capital Tournament as they won the final two games of the weekend to bring home the consolation championship Saturday afternoon.

In the consolation finals, the Ladybugs knocked off Blackwell for the second time in five days, 41-25. Alva improved its record to 8-2 on the season.

Alva's offense struggled to get going throughout the first two and a half quarters. In the first quarter, the Ladybugs got a three-point basket from Payton Jones and Julie Owen added another three with 2:20 to go in the first to make it 6-0.

Blackwell quickly answered with an 8-0 lead, including back-to-back three-pointers to take the lead. However, Rianna Clark was able to get to the line to knock down a free-throw and Jones took the ball coast-to-coast for a fast break layup at the buzzer to give the Ladybugs a 9-8 lead after one.

In the second, Blackwell retook the lead on the first possession as Paige Scott, who led the Lady Maroons in the contest in Alva earlier in the week, took the ball to the hole for an easy layup. Madelyn Hankins added a basket as well to extend Blackwell's lead to 12-9.

It wouldn't be until 2:51 in the second quarter the Ladybugs would find the bottom of the net. In a great offensive possession, the patient ladies moved the ball around, ultimately allowing Jones to get free for a layup. She was fouled on the play and converted the free-throw to knot the game at 12.

That started a 10-0 run for the Ladybugs. Clark took a pass out of the air at the top of the Blackwell key, taking the ball in for a layup. She followed with a three-point basket with 1:17 to go in the half, and added another two points in the paint just before half.

Coming out for the second half, offense was a premium for both teams early in the third quarter. The Lady Maroons three free-throws early in the quarter to cut the lead to 19-17.

But the Ladybugs were able to put together a quick spurt to take a 26-17 lead into the fourth. Jones started the stretch with a pair of free-throws before Hallie Durkee hit a wide open three from the corner with 1:10 to go in the third. On the Ladybugs' next trip down the court, Clark pulled down an offensive board, finding Jones for an easy two.

Finally, in the final quarter, the Ladybugs broke the game open, forcing the Lady Maroons to turn the ball over five times. After Clark added an early free-throw, Jones intercepted a Lady Maroon pass and drove in for a left-handed layup.

Clark then added yet another basket in the paint with 6:08 to stretch the Ladybug lead to 11. Clark finished with a career high 10 points in the contest.

Alva finished the last six minutes of the game with Jones going six-for-six at the line. She added a put back layup with 1:50 to go to bring the score to 41-25. Jones led the Ladybugs with 22 points.

Owen, Durkee and Stephanie Spellman each finished with three points.

Alva returns to conference action Thursday evening on the road as they travel to face Newkirk at 6:30 p.m. They will face Blackwell yet again for a rare Saturday afternoon tilt next weekend in Blackwell. Tipoff is scheduled for 1 p.m.

On Friday against Pond Creek, the Ladybugs rebounded from Thursday's heartbreaking loss to rival Chisholm. Sophomore standout Jones took over the game in the fourth quarter with 10 of her game high 19 points. Jones' play kept the separation Ladybugs needed to defeat the Lady Panthers, 37-31.

At the start of the game, it looked as if the Ladybug defense was going to be too much for Class A Pond Creek as they forced the Lady Panthers to turn the ball over on their first four possessions. However, the opponents stuck with their game plan and took a two-point lead over the Ladybugs into the second quarter.

Jones knocked down the first basket of the contest almost four minutes into the game with a jumper from the free-throw line, which was answered by a three off the hands of Lauren Tefft. Alva retook the early lead with a Jones layup, but yet again Tefft hit a long range shot to put the Lady Panthers up 6-4.

Pond Creek played tough and had an answer for each Ladybug score in the opening period. With a minute to go in the quarter, Owen hit a jumper to tie the game, before Ambree Thomas turned a missed shot into a second chance opportunity for the lead.

Despite trailing in the after one, the Alva defense continued to play well into the second. The Ladybugs took the ball away from Pond Creek six more times heading into halftime.

Tatum Rouse-Murphy started a 7-0 run in the second with a three-pointer from the left wing, receiving a pass from Acacia Chartles with the assist. On the next Lady Panther possession, Clark took a pass out of the air and converted a layup to make it a 11-8 contest just a minute into the quarter.

Jones added the next five Ladybug points with offensive board and layup, followed by a three from the right side, assisted by Ray Ray Bell. The Lady Panthers cut into the lead late in the second with a couple of field goals to make it 16-12 at the break.

Alva started the second half of the contest strong with a layup and three-pointer from Owen to stretch its lead to 23-12. Owen finished in double-figures with 11 points.

However, the Lady Panthers battled back, capitalizing on Ladybug turnovers with a 9-0 run to cut the lead to two with two minutes to go in the quarter. Durkee ended Alva's drought with a 1:10 remaining, taking a great look from Spellman for layup. 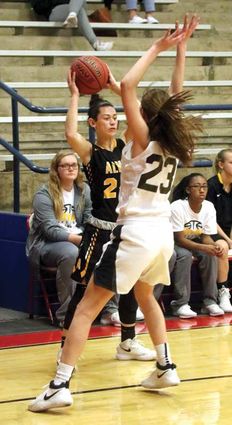 Alva's Hallie Durkee looks for a teammate around a Pond Creek-Hunter player in Friday's game at the Wheat Capital Tournament. The Ladybugs posted a 37-31 win to advance in the consolation bracket.

Pond Creek retained its momentum a minute later with a layup out of the hands of Ambree Thomas with nine-seconds to go in the third stanza, and eventually tied the game with the first basket in the fourth.

After being held scoreless since midway through the second quarter, Jones came alive in the final seven minutes on the offensive end. With 6:41 to go, Jones took the ball strong to the hole for a basket, drew a foul, and converted the free-throw for a three-point play.

Jones stretched the lead to six a couple of minutes later as she turned a Pond Creek missed basket into three-points on the offensive end. Meyer found Jones behind the arc for the assist.

The Lady Panthers kept the game within reach until the 2:37 mark when Jones hit a running jumper, followed by a layup on the next possession to make it 37-28. Pond Creek's Caroline Muegge dropped in a three in the final minute to bring the contest to a 37-31 final.