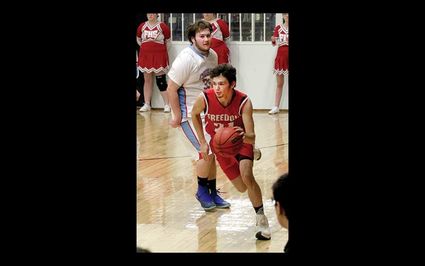 Taking off on a fast break, Kristopher Fargo (21) sprints down court in front of the Aline-Cleo bench. Fargo led the Eagles with 19 points in the victory over the Cougars.

ALINE, Okla. – The Freedom High School boys avenged a season opening loss to Aline-Cleo with a 51-46 win on the road Tuesday night. The Eagles improved their record to 5-10 this season, winning four of their last seven games.

The boys will be back in action tonight at home against Waynoka, with tipoff set for 7:30. They will hit the road next Tuesday at Burlington, before a weekend set of games at the Buffalo Tournament.

Before the date with the Cougars in Aline on Tuesday, the Eagles took part in the Medford Tournament last weekend. After an 84-35 setback against Drummond in the tourname...