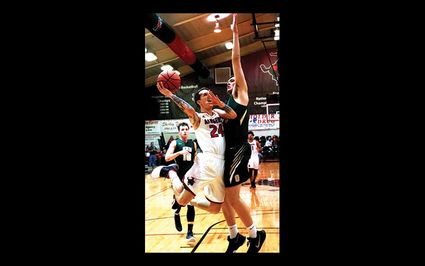 Ranger Cody Halvorson (24) goes for the slam dunk with the goal being defended by OBU's Reid Davenport, freshman from Dale High School. Halverson is a senior from Temple, Texas.

Despite a back-and-forth contest, the Rangers defense impressed in the second half as they held the Bison to just 35 percent from the field, allowing the Black and Red to pull ahead. Northwestern also dominated in the paint out-rebounding OBU 43-30, a number that proved to be a major factor down the stretch.

A loss to Southern Nazarene on Thursday led to the Rangers slipping from No. 2 to No. 4 in the GAC standings. Oklahoma Baptist came into Saturday's contest sitting in seventh place following a three-point loss at Southeastern Oklahoma State. The Bison's sub .500 record has been a result of posting one of the league's worst defenses thus far, allowing 81.5 points per game.

Despite their record, the Bison have produced one of the conference's most dangerous scorers in Chandler Rickey, a 6-foot-6 senior averaging more than 20 points. But the short preparation time that coach Shawn Dirden had to prepare his troops seemed to be working, as the Rangers held Rickey to just four points in the first half.

Northwestern's big men were effective in shutting down Rickey as they held him to just 12 points while forcing his five turnovers.

Ranger guard A'keem Oglesby returned to form in the win going 4-for-6 (12 points) from beyond the arc in 20 minutes on the floor.

With the game tied up midway through the second half, the Rangers pulled ahead with a 13-4 run led by Cedric Collinge and never looked back. Collinge added three layups and an assist in the span of three minutes, slowing down the Oklahoma Baptist momentum.

The Rangers will have another quick turnaround as they wrap up this stretch of three games in five nights on Monday, Jan. 15, when they head to Weatherford to take on GAC rival Southwestern Oklahoma State. SWOSU sits 12th in the conference and enters play with a 3-11 record (1-7 GAC) after losing to Southeastern on Saturday.