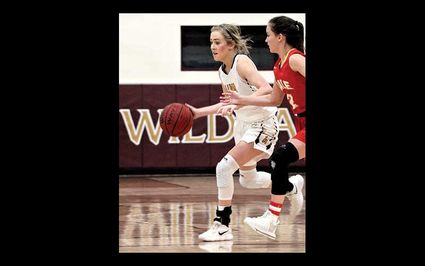 Ladybug senior Tatum Rouse-Murphy switches the floor on the offensive end during the fourth quarter against Dale during semifinal action at the Cashion Tournament. The Ladybugs took the highly ranked team to overtime, but lost to the Lady Pirates 46-40.

CASHION, Okla. – On Saturday, the No. 14 Alva Ladybugs brought home the third-place trophy as they finished the Cashion County Line Tournament with an outstanding 46-35 victory over No. 13 Riverside Indian School.

The Ladybugs fell into the third-place contest following a Friday night overtime loss to class 2A #3 Dale, 46-40.

In the final two games of the tournament, Payton Jones netted 30 points in each, after she went for 35 in the tournament opener. Jones was extremely aggressive in the three games, getting to the free-throw line 47 times, making 38 of her attempts, including a perfect...