Big first quarter deficit to much for Bugs; AHS falls to Chisholm 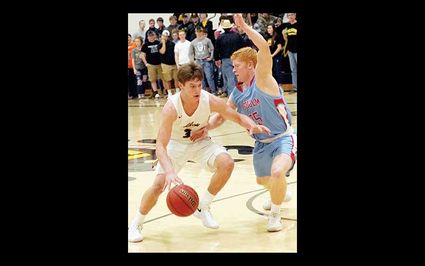 Alva's T.W. Beiswanger (3) was assessed a charging foul early in the first half against Chisholm.

ALVA, Okla. – The Alva Goldbugs didn't exactly have the start to their 2018 playoff run they were expecting as the Bugs fell to rival Chisholm, 55-36, in the district championship game.

Alva will now have to take the long route to the "Big House" as they move into the loser's bracket of the Oklahoma Secondary Schools Activities Association playoff tournament.

The Bugs will be tasked with taking on Newkirk on Thursday at 3 p.m. at Chisholm High School. They have dominated the Tigers in the two regular season meetings, winning the games by a combined 78 points.

A victory will advance them on to play Friday afternoon at Perkins-Tryon, and a loss ends the season for the Bugs.

During the second half of the season, the Goldbugs have struggled early in the games and allowed teams to jump out with big leads. The story was much of the same on Saturday as Chisholm jumped out to a 16-2 lead after the first quarter.

Mitchell Meyer put the Bugs on the board at the start of the game with a jumper from the left side to make it 2-0. But the Horns hit four three-pointers in the first to open up the big 14-point lead heading to the second.

After the Longhorns make it a 17-point game early in the second quarter, the Bugs settled down and started to put points on the board. Lane Scarbrough hit a three to break the 19-0 run by the Horns, and after another Chisholm three, he added a jumper from the free-throw line.

The Horns drained another three just before Davion Murrow answered with a jumper in the paint to make it 24-8. But the Horns responded as they had through the first quarter and half, draining back-to-back threes to extend their lead to 22.

Connor Martin was a bright spot for the Bugs in the second quarter. With 4:26 to go, the sophomore drained a shot from behind the arc on the left wing. On the next Goldbug possession, Martin was fouled on a three-point shot in the left corner of the floor, but was only able to hit one of his three chances at the line.

Chisholm eventually took a 33-13 lead into the break.

The three-pointers continued to rain down for the Longhorns in the third quarter, usually coming after a basket on the Goldbug end of the floor.

Trailing the Longhorns 35-13, Meyer nailed a three-pointer one minute into the second half. A couple minutes later, Flynt hit a running jumper in the paint to make it 39-18.

Later in the quarter following a missed Longhorn shot, Meyer added two more points with a nice drive and eurostep for a layup. Following a basket on the Longhorn end of the floor, Flynt sank a three from the right wing, assisted by Scarbrough, to make it 44-23 with 3:10 to go in the third.

Meyer added a jumper in the paint before the end of the quarter, but Chisholm closed with a small run to take a 25-point advantage into the fourth.

The Bugs started the scoring in the fourth with a Cameron Gordon layup, assisted by T.W. Beiswanger. On the next trip down the floor, Beiswanger hit a pair of free-throws to make it 50-30.

Following another Chisholm answer from long-range, Scarbrough hit a kiss off the glass from the left side and Meyer went to the glass for a fast break layup a little later to bring the score to 53-34 with a little over three minutes to go.

Meyer led the Bugs with 11 points. Scarbrough finished the game with seven points, Martin added six points, Flynt tacked on five points and Gordon had three fourth quarter points. Rounding out the scoring for the Bugs was Beiswanger and Murrow with two points each.

Chisholm landed 12 three-pointers in the game, led by TC Smith with four, en route to his team high 13 points.

The Goldbugs have dropped six straight games and 10 of their last 11 contests.