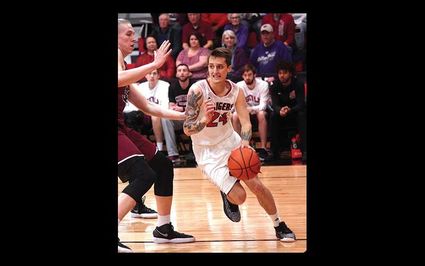 Ranger senior Cody Halvorson (24) faced a rough SNU defense, scoring only 6 points in the contest that changed SNU's unbeaten record for the season.

ALVA, Okla. – In a battle of regionally ranked teams, the Northwestern Oklahoma State Rangers (18-6, 14-5 GAC) played host to the No. 10 ranked Southern Nazarene Crimson Storm and pulled off the win in a wild 53-52 buzzer-beater finish.

SNU came into the game undefeated in Great American Conference play at 18-0 and 21-1 overall, but left Alva with a blemish in their conference record.

In a low-scoring defensive game, there were still three Rangers who finished with 10 or more points on the afternoon as Treyvon Andres led the way with 14, while also pulling down seven boards.