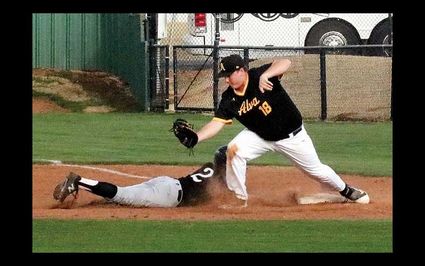 Max Parsons (18) receives a snap throw at first from catcher Jacob Faulkner as a Woodward Boomer base runner dives back into first. At the plate, Parsons was two-for-two with three runs batted in and two walks in the Goldbugs' 15-3 win over the Boomers.

ALVA, Okla. – A big first inning lifted the Alva Goldbugs baseball team on Tuesday as they rolled passed the Woodward Boomers, 15-3, in five innings to snapped a four-game losing skid.

Alva, now ranked No. 17 in the OSSAARankings.com poll, moved its record to 6-4 on the season. The Goldbugs are back in action this weekend at a three-game tournament in Perry.

Coming off a weekend where the offense struggled in four games against arguably each team's best pitcher, the Bugs offense came alive in the showdown against rival Woodward at Crenshaw Field. The Bugs rattled off 11 hits, earned nine...