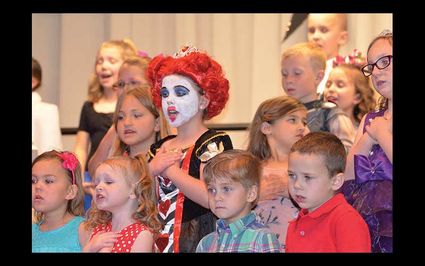 Elementary students sing for the spring music program with kindergartener Avery Roberts as the Queen of Hearts.

On May 3, Burlington school hosted their annual spring program for the Burlington school choirs and bands. The evening began with the junior high and high school band performing the classic 25 or 6 to 4 and the theme song from "Jurassic Park." The fourth- through sixth-grade band then performed "Power Rock," "Ode to Joy."

The pre-K through third-grade presented a lively performance of "Lights, Camera, Action!" -- a musical with lots of action and familiar tunes. Several students portrayed famous actors and actresses such as John Wayne, John Travolta, Katherine Hepburn and Judy Garland and movie characters like the Queen of Hearts, Captain America, Thor and Katniss Everdeen.

The fourth-, fifth-, and sixth-grade choir sang a spirited song called "Tonga" accompanied by music director Isileli Ofiu ("Mr. O") on the djembe. The junior high and high school choir, accompanied by Raye Lyn Bird, sang, "I Can See the River Jordan" and were then joined by the fourth-through-sixth-grade choir for songs in memory of late superintendent Glenn Elliott, singing "Hallelujah" and "See You Again."