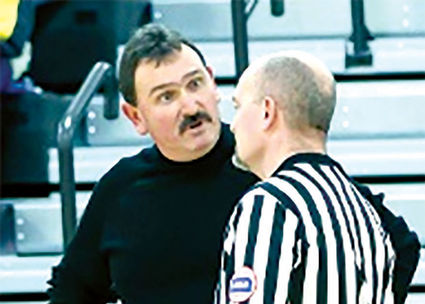 As a 25-year coach for the South Barber High School Lady Chieftains, it's not uncommon for Steve Roberts to be in the face of the referee, trying to convince him to rethink a call. Despite ref/coach disagreements on the court, Roberts said he later shared this picture with the official and they had to laugh.

You've heard the terms "slow as molasses in January" or "getting blood out of a turnip." That aptly describes the winning coach and teacher Steve Roberts talking about his many accomplishments.

Roberts and his wife Kay have been part of the South Barber School District in Kiowa, Kansas, 25 years where he's taught math and coached Lady Chieftain basketball at South Barber High School with an overall winning record of 400-175. Prior to Coach Roberts, SB girls basketball losing record was 98-211.

His record of winning basketball and honors certainly did not come from Roberts himself, who is th...