NWOSU professor tells about her teaching experience in Venezuela 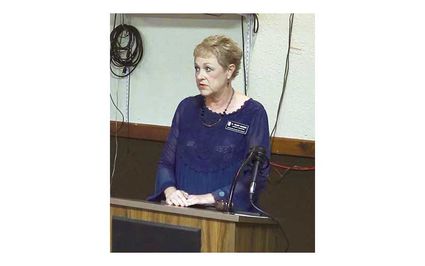 Kiwanis Club had an endearing speaker visit on Sept. 5. Dr. Colleen Golightly, a Northwestern Oklahoma State University (NWOSU) associate professor of education, shared about her time teaching abroad. Dr. Golightly has recently returned from teaching English in Venezuela. Golightly, before teaching in Venezuela, taught at the NWOSU Enid campus; now, she is back at NWOSU, but in Alva. Golightly is originally from Guthrie, so she knows and loves small town living. She remarked that Alvans have been nothing but kind to her.

Every heart was warmed by her stories of her time in Venezuela. She called her time there an incredible, God-given experience. She taught at a private school in Maracaibo called La Escuela Bella Vista. This is a K-12 college preparatory school with 100 percent Venezuelan students. Golightly said about 90-95 percent of the students would go on to attend top-notch universities in the U.S. The administration and teachers were from all over the world and usually worked two to three years in each place. She taught English in grades 6, 7 and 9.

Upon realizing that the American flag sitting on her desk represented her home country, but the rights and liberties represented by the flag did not apply to her in Venezuela, she felt grateful for her home country. Golightly tearfully mentioned how blessed she feels to live in the U.S. where she feels safe and has what she needs.

She was a legal resident of Venezuela, which is a socialist country under the rule of President Maduro. Golightly, as a resident, fell under the same restrictions as the native Venezuelans. She used the Bolivar (the local currency) and if you ran out of money, there was nothing you could do. American money is not allowed in Venezuela; in fact, it cannot even be accessed there.

She was taught that when leaving her apartment, she should not bring any electronics, purse, nice clothes, jewelry or money. She usually traveled places with the other teachers, but was still viewed as an American, and therefore rich.

The students all came from affluent Venezuelan families. They were very sweet, intelligent and spoke English well. They were taught that out of respect, she should be called a Venezuelana, teacher, or Ms., but occasionally they affectionately referred to her as "gringa."

Golightly told a story of twin boys in seventh grade. Three to four months into the school year, they revealed they had previously switched classes and tricked the teachers. They made sure to qualify that they had never done that in her class! Golightly made a mental note to keep an eye on those funny boys; yet, she still fell for another trick of theirs.

One day, one twin came up asking a grammer question for his brother (who was in another class). He wanted to know the proper tense of the word sleep. Golightly thought, surely this isn't a trick, he really has a question. So, she answered, telling him the proper present tense was "sleep" – and at that moment all of her seventh graders proceeded to fall asleep on their desks. She didn't know whether to be mad or laugh! She says she will remember that story forever.

Golightly said what you see on the news about Venezuela is true. Venezuelans are oppressed by President Maduro. Medicine, most foods, and water were restricted. Power would be turned off randomly or for days at a time. There were even times you would have to go without water.

Venezuela is ruled by fear and oppression, but the people are still happy. Still, desperate times call for desperate measures, and Golightly and three other teachers experienced this desperation personally.

Golightly was robbed in her apartment while she was sleeping. She was the fourth teacher from her school to be robbed. As she slept, without hearing a thing, someone scaled her apartment building to the top and robbed her in the middle of the night. All her electronics were taken, but thankfully she was left alone. Understandably, Golightly was very shaken up by the robbery. The schools' administration sent her home early. It was not her choice, but they felt it was safest for her.

Golightly asks for prayers for Venezuela and wants to continue to share about her experiences. She wishes she could have had a proper goodbye with her students and fellow teachers and dearly misses them.