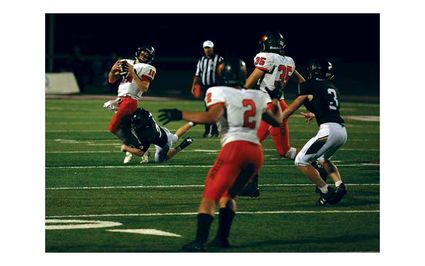 The Goldbugs' defense comes up big in the fourth quarter.

A game with nearby rival Fairview always promises to be good, and Friday night's episode didn't disappoint. Fans from both sides were on the edge of their seats as the fortunes of Alva and Fairview rose and fell. In the end, the Alva Goldbugs claimed a one point victory, 27-26.

It was a hard-fought contest accompanied by plenty of flying penalty flags. Several players took to the sidelines after what's hoped are minor injuries. Alva's depth in number of players was instrumental to their gaining the edge.

The Goldbugs were up 13-7 at the end of the first quarter and led by 19-14 at the half. However, Fairview pulled ahead by a point 20-19 and held Alva scoreless in the third. Just over halfway through the final period, Alva scored a TD and opted for a conversion to lead 27-20. Fairview came back to add a TD, but their conversion attempt to tie was blocked. The Yellowjackets tried an onside kick and fell on the ball for one more chance. The Goldbug line held, and Alva claimed the final victory.

Alva started the game with the ball but a flag and a quarterback sack canceled out their forward progress. The Goldbug defense didn't let Fairview move past the line of scrimmage, and Alva took over again.

This display of tough defense on both sides continued through two more series for each team. Alva quarterback Mitchell Meyer was finally able to gain ground with a series of passes to Kaden Hensley, Cameron Gordon, Dalton Hess and Reece Martin to move the ball within scoring range. Meyer ran the ball to the six, and Hensley rushed the final distance for the TD. Gordon's kick was good, and Alva led 7-0 with just over three minutes remaining in the quarter.

On the next play, a face mask penalty on Alva moved the Yellowjackets from the 21 to the 36. Then a Fairview false start set them back five. Senior quarterback Kade Dillard threw on the run to Jadon Jones to advance 14 yards, then Dillard ran for the first down. He threw for another first down to Chad McGolden, and the Jackets were on the Alva 20 yard line. Forward progress was blocked on the next three tries, but Dillard scampered for pay-dirt on the final chance. The kick was good, and the score tied at 7-7.

The Goldbugs wasted no time answering as Hensley raced 63 yards to the goal on the first play. Gordon's kick missed the uprights to the left, but Alva led 13-7 to end the quarter.

A determined Fairview offense made steady progress with little three and four yard gains until they reached Alva's 24. From there Dillard threw to McGolden in the end zone for the touchdown. The kick was good, and Fairview pulled ahead 14-13.

Martin ran back the kickoff to give the Goldbugs good field position at the 46. Meyer rushed for the first down. A personal foul called on the Jackets gave Alva a boost and they found themselves at the Fairview 28. Meyer connected on a throw to Gavin Perez in the end zone. The conversion attempt failed, and Alva led 19-14.

Gordon unleased a deep kickoff, but it was negated by an off-sides flag. His next kick left Fairview in better field position at their 40. It took three plays to move into Alva territory. Dillard threw to Andrew Houk for an 18 yard gain. Alva applied pressure including a quarterback sack. Add a couple of Fairview penalties for delay of game and false start, and the Jackets stalled out at the Alva 26.

The Goldbugs took over but Meyer was unable to connect on passes. Alva was aided by a pass interference call on Fairview, but the Goldbugs drew a false start flag in a later play. Meyer had to kick the ball away on the Fairview 44.

The Jackets made a good run at the goal making four first downs. With six yards to score, Dillard ran a reverse to connect with freshman Brody Wills. The Goldbugs stopped the play, and time ran out. Alva led at the half 19-14.

The third quarter was dismal for the Goldbugs. Fairview started off and ran 13 plays to advance 72 yards to score aided by an early 35 yard run by Jones. Alva helped the Jackets with a face mask penalty. The Yellowjackets made little runs that added up, and the score was on a four yard pass to McGolden.

Alva was called for unsportsmanlike conduct on the kickoff play. On the next play, Meyer took the snap but the ball came out of his hands and Fairview fell on it.

In two plays, Fairview was three yards from the goal. They were moved back five on a false start penalty. The Goldbug defense applied pressure, taking down Jones for a one yard loss and sacking Dillard at the 14.

The Goldbugs took over on their 14. Several runs by Meyer, Martin and Hensley took the ball to the Fairview 37. From there Meyer spotted Dalton Rose in the end zone and unleashed a pass. McGolden intercepted, and Fairview took possession of the ball on their 20.

The Jackets had time for one play before the period ended with Fairview leading 20-19.

Fairview managed to advance from their 28 to the Alva 41 where they were stopped and had to punt.

Alva started at their 21 and completed two first downs. On the next series, the Goldbugs gained one yard on a Hess carry and four yards on a pass to Martin. The next pass by Meyer to Perez was batted away by McGolden. Meyer pitched the ball out to Hess who was stopped right at the first down line. Measurement showed Alva had barely made the first down.

After an incomplete pass, Hess ran the ball 12 yards and Hensley five. Alva was at the seven yard line, and Meyer ran the ball in for the score. Meyer threw to Perez for the two point conversion, and the Goldbugs led 27-20 with just over five minutes left. 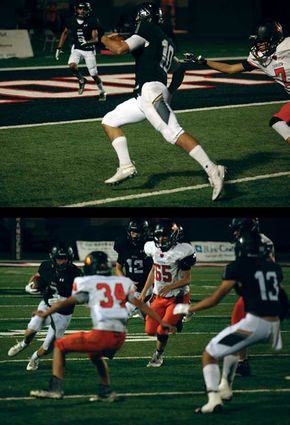 The first two Fairview passes failed, but Wills caught the ball to move into Alva territory. In four more plays, the Jackets were at the Alva 30. Following an incomplete pass, Dillard handed off to Jones and the freshman ran the ball 30 yards for the touchdown. With Alva up by one, Fairview chose to try for two points but failed.

Wills tried an onside kickoff. Fairview got to the ball first and took possession at the Alva 47. After an incomplete pass, Dillard was sacked on the next play by Dalton Manning at the 50 for a loss. Dillard threw to McGolden for a 12 yard gain but still needed one yard for the first down. Jones tried but didn't quite make it past the Goldbug wall.

With seconds left in the game, Meyer took two snaps and a knee to run out the clock.