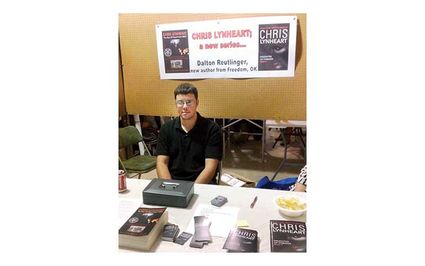 Dalton Reutlinger, a Freedom resident, is promoting his second published novel, "Daughter of Forayer," a sequel to his first novel, "Chris Lynheart: The Rise of Experiment 2025."

Dalton Reutlinger is a graduate of Freedom High School and lives in rural Oklahoma. He took up writing at a relatively young age and was originally inspired by the Naruto anime and manga publications.

Reutlinger's first of two books, "Chris Lynheart: The Rise of Experiment 2025" (published by Xlibris, 2012), takes place in Washington, D.C., in the year 2020. Lynheart's only wish is to find his mother whom he has never met. However, conflicts keep him from fulfilling his dream including a new terrorist group from the Middle East that initiates World War III.

Lynheart, who is a presumed fail...