History comes to life in amphitheater near Medicine Lodge 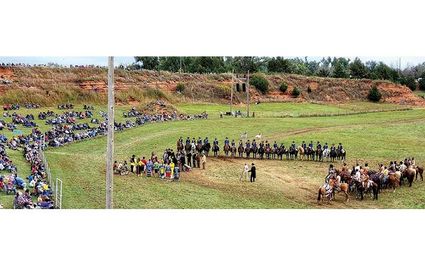 This is an overview of this year's reenactment of the signing of the great peace treaty between the U.S. government and the proud civilization of the Plains Indians near Medicine Lodge at the Peace Treaty Pageant last weekend. Photo courtesy of the Medicine Lodge Peace Treaty

The entire Medicine Lodge Indian Peace Treaty weekend centers around the signing of that historical document. Kansas' own Medicine Lodge Indian Peace Treaty Pageant commemorates the great Peace Council of 1867 between the U.S. government and the proud civilization of the Plains Indians. Generation after generation of locals put on this huge production every three to five years as they did last weekend.

The pageant features flashback to earlier times with the innocence of the Spirit of the Prairie and the Age of Discovery with explorers and lots of action waking up the virgin prairie. The Indians lived on the land and then settlers and pioneers came in search of a new life. So did the cowboys with cattle drives. The once peaceful prairie was in total chaos.

The Peace Treaty Pageant program explains what conditions led to the signing in this excerpt:

"At the end of the Civil War the western movement began in earnest. The Plains Indians found themselves pushed farther and farther from their hunting grounds. The excessive slaughter of the buffalo and the encroachment of settlers caused the Indians to react with a wave of violence that shocked the nation.

The white man, himself, was guilty of atrocities directed at the Indian. The plains experienced warfare from the Rocky Mountains to the Missouri River. In 1867 Congress formed a peace commission to meet with the five tribes of the Plains Indians – the Kiowas, the Apaches, the Comanches, the Arapahoes and the Cheyennes. The meeting took place at the site of the Kiowa Medicine Lodge, an immense structure erected by the Indians and used by them as a council house." 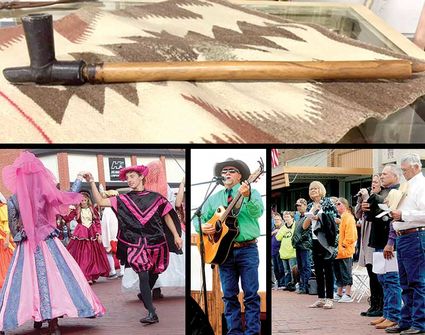 Pictured at top is the Peace Pipe of I-See-O, a Kiowa Indian chief who was at the signing of the peace treaty in 1867. The peace pipe is on display at the historical Stockade in Medicine Lodge, Kansas. The pipe was given to Mrs. George Hibbard by I-See-O's nephew, George Hunt. (Photo courtesy of the Stockade) Bottom left: During the parade, a group of local youth come through with ornate colorful costumes as they dance. They represent some of Spaniards during the Age of Discovery at the Medicine Lodge Peace Treaty Pageant. The girl in pink and blue with her back to the picture is Madison England with dance partner Brayden Schmidt. The girl in the background is Grace Bedwell. Bottom center: The first performer on the downtown stage Friday after the parade is Del Shields. Known as a true cowboy, Shields is a western music recording artist, cowboy poet, and featured entertainer and co-host of Best of America by Horseback on RFD-TV. Bottom right: As Sharon woman Cynthia Rausch performs the national anthem, hats off and hands on hearts come automatically among this crowd. In the print jacket holding a mic is Emcee Barb Bedwell and on the right end holding a mic Emcee Jerry McNamar. Bottom photos by Yvonne Miller