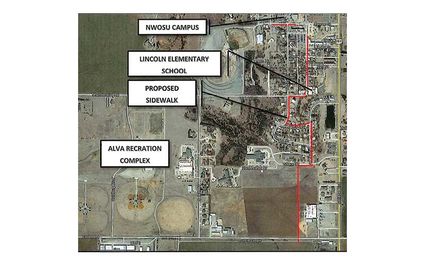 Alva is seeking a grant to complete a segment, marked in red, of the POW Walking Trail.

In an effort to push owners of dilapidated building to repair them or have them torn down, the Alva City Council held a public hearing on three more properties at their Monday, Oct. 15, meeting. That number was quickly changed to two after it was announced one location, 724 Choctaw, was in probate proceedings.

A house at 414 Seiling owned by Joyce Oakes was first to be discussed. Oakes is in a nursing home. Her daughter Alice Putnam spoke on behalf of the family. She said they had tried to convince her mother to sell or rent out the property, but it has been unoccupied for years.

Putnam said the family agrees the house is in bad condition and needs to be torn down. She and her husband are currently cleaning out the house. She said they'd like to have 60 days to finish. Putnam said Michelle Shelite, executor for the property, agrees.

City Business Manager Joe Don Dunham explained the council would probably go ahead and declare the property dilapidated. It takes some time to proceed with tearing down the building, and he said 60 days was a reasonable time for the cleaning out process.

Bob Beason and his daughter Carol were present to discuss his property at 1437 Young. Carol said her father was unable to do much physically because of recent surgery and asked for a reasonable time to get their stuff out. When asked for a more specific time period, she suggested six months.

She was told that was too long a time and that she should stay in communication with Dunham.

Following the hearing, the city council voted on each property separately, declaring both to be dilapidated and authorizing city staff to abate the nuisance.

The Oklahoma Department of Transportation (ODOT) has set up a transportation alternatives program (TAP). This program replaces the funding from 21 programs including transportation enhancements, recreational trails, and safe routes to school. They are seeking projects outside the Oklahoma City and Tulsa areas with populations up to 5,000. Funds cannot exceed $700,000 per project.

Dunham asked the council to approve a resolution authorizing application for a TAP grant and committing to maintenance of the project. If the grant is approved, the city would provide a 20 percent match.

The council approved the grant application for the project costing $559,816.12. The approximately 5,840 foot route starts at Harper Road (fairgrounds road) across an open field to Share Drive then shifts east and then north along Murray Drive to North Sunset Drive. Following the north side of Sunset Drive, the sidewalk will extend westward to and then to the north along Young Street before paralleling Thunderbird Road east to Lincoln School and Davis Street northward. It will continue to an existing segment of sidewalk along Davis that continues west along Monroe St. An additional new segment is proposed to extend the rest of the distance along Monroe St. to the east side of 8th Street.

During the citizen comments section of the council meeting, Alva resident Tom Crenshaw asked some questions about the proposed walking trail addition. He wanted to know if the sidewalks would be in the yards along the route. Dunham said yes, but they would be built in the city easements for the streets.

Councilmember Mary Hamilton, who lives in that area, commented that adding sidewalks along Murray and Sunset could cause some problems with traffic. Currently, residents parking along the street pull their vehicles into the edge of yards. Even then it is sometimes difficult for one vehicle to drive along the street. Dunham said the city needs to look at the traffic flow in that area.

The city is seeking another grant for a water line project. Every year the Oklahoma Department of Commerce offers Rural Economic Action Plan (REAP) grants. In the past, the city has sought funds for sanitation department poly-carts and other projects. Those have been only partially funded.

Dunham said it appears the grants are more likely to be awarded for water projects. He proposes applying for constructing a water main along the east side of Lane Street (U.S. Highway 281 North) from Maple to Barnes. It would provide water to an area of town where services do not exist. This area potentially will house a new hotel, restaurant and other retail buildings.

Dunham said the original budget for this project was about $120,000. With some modifications and the water crews doing the installation, the project could be done for about $50,000. The maximum REAP grant amount is $40,000. The council approved applying for the grant.

The Alva Utility Authority, consisting of the same members, approved a couple of change orders. One for $5,000 was to add a chain link fence with security top around the entire Young Street Tank Farm. The other was to add 31 days to the construction completion time for the east Alva sewer line project due to rain delays.

The board members also agreed to seek bids for the replacement of 6,500 linear feet of 16-inch transmission line for the city's water system. The city wants to replace a 12-in line installed in 1941. It is interconnected with a 16-inch line installed in 1984. The reduction in line size from 16 to 12 inches reduces the flow capacity by about 15 percent of 150 gallons per minute due to friction losses. Dunham said due to the advanced age of the water line, breaks and failures can be expected to become more frequent.

Dunham said this water line is about half of the service line coming into town from the water wells. Original estimates were around $1.5 million but he said the water department can do the installation and reduce the cost to $412,450 which will be for materials.

The Alva Economic Development Authority only had the consent agenda scheduled for action. They approved minutes of the last meeting and paying claims of $20,404.37 and payroll expenses of $14,932.49.

A video of the meeting may be viewed at AlvaReviewCourier.com.