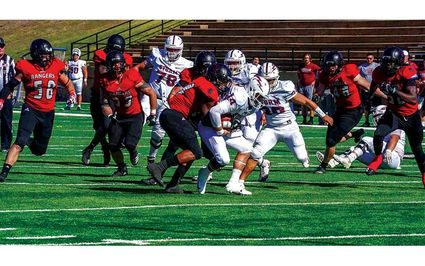 ALVA, Okla. – Northwestern Oklahoma State University football held on to a two-score lead after three quarters, but Southern Nazarene University made a charge to knock off the Rangers at home on Senior Day in double-overtime, 37-34.

SNU outscored the Rangers 20-7 in the fourth quarter to send the game into overtime. It was the first time since 2005 the Rangers would be forced to compete in an overtime contest.

With its backs against the wall after a SNU touchdown on its first possession in the first overtime, Cesar De Leon hit Raphael Edwards Jr. on a slant route in the middle of the field to send the game into the second overtime period.

The Rangers had the ball first in the second overtime and after a nine yard keeper by De Leon, an interception in the endzone on second down gave the ball back to the Crimson Storm. The Northwestern defense forced SNU to attempt a field goal, which was converted by kicker Carlos Anguiano to give the visiting team the victory.

NWOSU's record dropped to 3-6 this season, while the Crimson Storm moved to 2-8. The Rangers look to get back on track next Saturday when they travel to take on Oklahoma Baptist in Shawnee.

The Rangers had a good offensive day, racking up 532 yards of total offense, the highest output by the Rangers this season.

De Leon was 21-for-38 for 313 yards and three touchdowns. It was the first time this season Northwestern had passed for over three yards this season, while also posting 219 yards on the ground, also a season high.

The Rangers have not had a 300-yard passing performance since 2016 against Arkansas Tech.

Senior Horatio Smith hauled in six passes from De Leon for 114 yards and a touchdown in the fourth quarter to give the Rangers a two score lead at that point. Edwards had a career high five catches for 92 yards and the overtime touchdown. 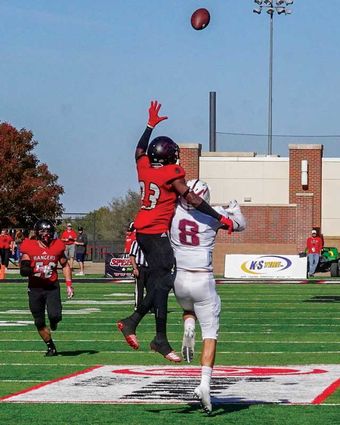 Playing in his final home game of his career, Zave Goodrich had a successful afternoon with two field goals in the first half from 20 and 24 yards out, respectively. The senior logged his two field goals and added four extra points.

Tyson Gatewood was the leading rusher with his second 100-yard game as he finished the contest with 113 yards. Fellow freshman Calion Baker logged his career high with 97 yards on 17 carries and a touchdown in the second quarter to put the Rangers up 20-7.

On the defensive side of the ball, the Rangers forced the Crimson Storm to cough the ball up three times. Kyler Ferguson, Maurice Wright Jr., Trey Merritt and Horatio Smith all forced fumbles in the game. Smith's forced fumble came following an interception, which De Leon recovered.

Dakota Driskill led the defense with 13 tackles, and Ferguson, a senior, was credited with 11. Wright and Brent also wrapped up the SNU quarterback with one sack each.