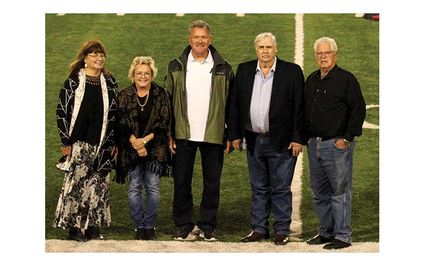 Six talented and successful individuals were honored for their accomplishments last weekend, Oct. 26-27. These Distinguished Goldbugs either graduated from Alva High School or worked at AHS on their way to successful careers in differing fields.

The six were invited to ride in the AHS homecoming parade on Friday and honored at the football game that night. On Saturday, the Distinguished Goldbugs along with friends and family members were treated to a catered luncheon at the Alva Middle School.

Todd Holder served as emcee during the luncheon, and AHS Superintendent Tim Argo welcomed the guests. Distinguished Goldbug Ambassador Aimee Chapman led the Pledge of Allegiance followed by an invocation by Charla Parker. The entire event is sponsored by the Alva Goldbug Education Foundation. Following the meal, each of the honored Goldbugs stepped to the podium to speak.

With bachelor's and master's degrees in music from Northwestern Oklahoma State University, Yoder has enjoyed playing the piano and organ and teaching innumerable people about music. She spoke of her Goldbug years "doing really fun things besides the classroom" like trips with speech and choir.

She used the musical theme "To God be the glory, great things He hath done." Yoder listed her family – parents, husbands, children and grandchildren – as some of the greatest blessings in her life.

She concluded, "Alva High School was wonderful, and I want you to know that a lot of the things that affected the rest of my life had their roots in Alva High School.

"I'm proud to be a Goldbug, and I want all these future Goldbugs to continue the tradition of excellence that we've always had."

After Holder introduced Decker, emphasizing she graduated from AHS 40 years ago, she said she could tell lots of stories about him. She said back in 1977 she and Holder spent the night in a tree at the courthouse. "Neither one of us can remember why. It had something to do with student council." She said all she could remember was "it was very cold and none of us fell out."

Decker recounted some of her accomplishments including bringing together a group of community members 18 years ago to form Freedom West Community Development Corporation, a private non-profit entity. Since that time Freedom West has brought over $12 million in funding to northwest Oklahoma. "I'm really happy to give back to this part of the state," she said.

Decker discussed future generations, "We have one of the best schools in Oklahoma right here in Alva, and I think all of us need to appreciate that. We have great kids, we have great teachers, and we have jobs and opportunities for people to experience the quality of life they expect."

Little said he and fellow honoree Wiley White grew up a couple of miles from each other and NWOSU President Dr. Janet Erikson Cunningham lived "just over the hill" in the Winchester community 20 miles northwest of Alva. Little says he loved to draw instead of study. Since retiring from farming and ranching, he has continued in drawing, painting and photography.

Looking back, Little said he played football. "That was the most fun I ever had in my life ... to hit somebody as hard as I can and not get hurt and not hurt them."

Speaking "for the kids," Little said, "You've all got choices to make. It's up to you what you do, and you will not always do what's best. But that's the way you learn. Everyone in here has made some choices that weren't good. It's up to you to learn, change them and be thankful that you can."

"I was very fortunate to have some good teachers," White said as he began. Honored in the business category, White founded Architectural Models in Norman. The company builds quality scale models for national and international industry leaders.

"One special teacher I had was Joe Heaton. The skills I learned from him I use every day in my business." White said he took four classes with Heaton including two shop classes and two mechanical drawing classes. "He went above and beyond what was expected to help us with our projects."

She obviously measured up as she kept the job as speech, theatre and debate coach from 1977 through 2004. The many forensic banners on display in the high school auditorium attest to her success.

She told how her whole family became involved from her parents to her husband and her sons. One son took over her position and continues her legacy. Rohrer attributes much of her success to the "outstanding parents and talented kids" during her years at AHS.

After the loss of her first husband, Rohrer married a farmer/rancher and has now embarked on a new career as a cowgirl.

"This is home," said Perkins who now lives in California. He described growing up in Alva as the coach's kid. "I had a ball in my hand in the gym, on the field, in the locker room ... always, always, always." 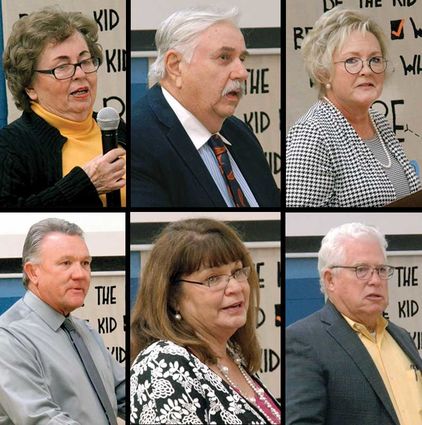 However, he said the driving force in his family was his mom. "She kept everything tight." She made sure responsibilities were taken care of before all the fun activities. As for his dad, "you were going to do your best because that was the expectation." He also expressed appreciation for his sister who, when he failed to meet expectations, would comfort him and say, "Brother, it's okay."

Speaking of Alva and northwest Oklahoma, Perkins said, "We're not placeholders here. We contribute." He described growing up in Alva, the coaches during his school years, his jobs with members of the community. As he and his wife fly into Oklahoma and drive to Alva, he said there's a peace that comes over them and a feeling that "we're almost home."

Jeff McAlpin, president of the Alva Goldbug Education Foundation closed out the program. He gave special recognition to Lizabeth Richey who handled the planning of the Distinguished Goldbugs recognition.

A video of the entire program may be viewed at AlvaReviewCourier.com.