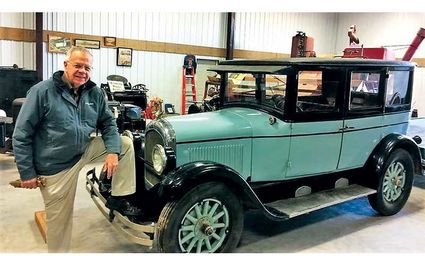 Richard Ryerson poses with the 1925 Chrysler he and his family donated to the Cherokee Strip Museum last Tuesday.

Alva's Cherokee Strip Museum received a generous donation from Mr. Richard Ryerson and family last Tuesday afternoon, when they graciously accepted a Chrysler sedan that was manufactured in 1925 – the same year the Chrysler Corporation was formed.

The corporation succeeded the Maxwell Motor Car company, naming Walter P. Chrysler president. Noteworthy is its swift entrance into the automotive competition – the first running Chrysler prototype was ready less than 60 days after the design had been approved.

The sedan donated by Ryerson and his family was originally purchased in December of that same year by Mrs. Ida J. Share (under the name of Mrs. S.B. Share).

The car remained in Share's garage at 815 Seventh St. in Alva until it was sold to Ryerson for $30 on Jan. 17, 1953. A young man at the time, Ryerson sold a horse saddle to pay for the Chrysler, his first automobile.

Later, after a significant mechanical workover and full body-sanding and paint job, it took on new life.

Down the road, after spending several years in storage, the car was refurbished for the 1987 Northwestern Homecoming Parade in what proved to be its final ride.

It is of special significance that Alva, through the Cherokee Strip Museum, has the opportunity to display one of the original Chrysler automobiles, underscored by the fact that the car was owned by two families who have helped shape this community over many decades. 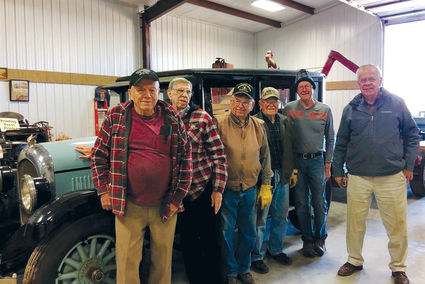 From left: Freddie Brown, Jack Fisher, Don Lynch, Verlin McMurphy, Arden Chaffee and Richard Ryerson stand in front of the 1925 Chrysler sedan, deemed at the time of its manufacture to be a trendsetter and the best car in its class.