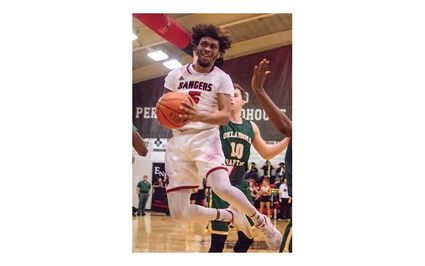 Ranger Andrew Clopton (5) goes up for the lay up. Rangers beat Oklahoma Baptist 78-77.

ALVA, Okla. – Joseph Moorer dropped 23 points and propelled the Northwestern Oklahoma State Rangers to a 78-77 come-from-behind win over Oklahoma Baptist with a last-second three pointer at the buzzer. The Rangers (2-4, 1-1 GAC) erased an 11-point OBU lead in the last four minutes before Moorer sent Percefull Fieldhouse into a frenzy with a shot for the ages, giving the Rangers their first Great American Conference win of the 2018-19 season.

Down by two with just 9.7 seconds remaining, Treyvon Andres pulled down the rebound on a missed Bison free throw and gave the handoff to Moorer. With a quick pump-fake, he crossed up the defender and stepped back just outside the three-point line, let it fly and buried the game winner.

"I knew JJ (Moorer) might have a little bit of magic in him today," said head coach Shawn Dirden after the win. "I got a text from his father earlier this morning and he told me that JJ's sister, who he hadn't seen in a long time, was coming to watch him play. I think that gave him an extra push tonight."

After a cold-shooting first half, the redshirt senior out of Long Beach, California, showed resiliency in the late stages of the game. Moorer finished 7-for-17 from the field, 6-for-6 at the free throw line and drilled three from beyond the arc, none bigger than the final shot.

"We've been struggling a little bit lately and this was exactly the momentum builder we needed," added Dirden.

The Rangers held a high-powered Oklahoma Baptist offense to its second lowest-scoring game of the year as the Bison only had six players register on the scoresheet, led by Antonio Wade with 19 points. 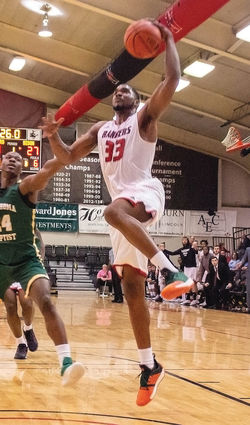 Ranger Treyvon Andres (33) goes up for the slam dunk during Saturday's game against Oklahoma Baptist.

On the offensive side of the ball, the Rangers only committed 11 turnovers (season low) and shot 47 percent from the field. Andres had 15 points and blocked five shots including the first two of the game, while fellow center Bryce Cashman was a perfect 5-for-5 for 14 points as the Rangers outscored OBU 40-20 in the paint.

Despite going just 4-of-13 from three-point territory, the Rangers connected on eight of their last 11 field goals and went on a 10-2 run over the final two minutes.

"I've told the guys, we need to protect our home court and a one-point win is the same as a blowout win; you've just got to get it done," said Dirden.

The Rangers will once again get the opportunity to protect Percefull Fieldhouse Tuesday, Dec. 4, when they face Newman University (5-4, 1-1 Heartland). The Jets are coming off a six-point overtime victory over Oklahoma Christian but have lost two of their last three. That matchup can be heard live on the Pulse 105.7 FM with Dustin Goodno and Jacob Boggess, or streamed at http://www.riderangersride.com.