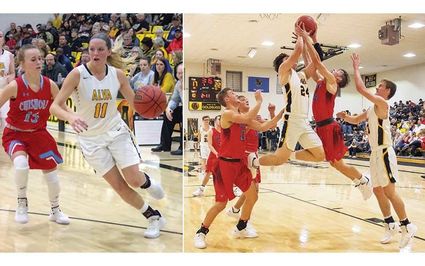 LEFT: Chisholm's Regi Pasby tries to keep Alva's Payton Jones from getting to the basket. RIGHT: Alva's Cameron Gordon (24) and Gage Kuehn (34) both jump for the rebound.

The Alva girls were behind by four points at 37-33 going into the final quarter. The score stayed close until the final seconds of the game. Payton Jones went to the foul line twice and posted four points to put Alva up 48-40. Tatum Long managed a stick-back bucket to add two points for the Lady Longhorns for the final score.

Payton Jones led the Alva scoring with 25, making 19 of those in the second half. Hallie Durkee had nine points followed by her freshman sister Chloe Durkee with six. Rianna Clark posted four points with Zoe Moorman and Stephanie Spellman making two each. Alva was really hot from free throw range, scoring on 13 of 15 opportunities.

Tatum Long led the Lady Longhorns with 16 followed by Danae Stidham with 13. Briley Yunker had six points, Courtney Petersen and Jessica Corey three each, and Tatum Sefeik had one. 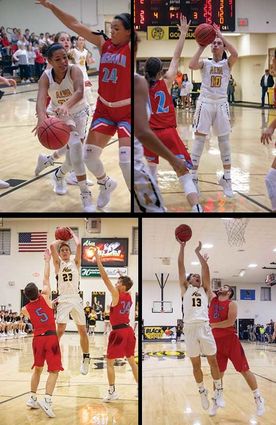 The Alva Goldbugs played well the first half but just couldn't find the basket in the second half.

Leading the Alva scoring was freshman Donald Blalock with 10 followed by Dylan McGuire with eight and Mitchell Meyer with six. Dalton Rose, Austin Reed and Cameron Gordon had five each. Kaden Hensley with two and Braden Hofen with one rounded out the scoring. Alva was six of 14 from free throw ranges.

Noah Hand led the Chisholm scoring with 21 followed by T.C. Smith and Colton Childers with 11 each. Gage McQuiston had seven, Alex Danielson four and Parker Warnick and Bryce Morris had two each.

The Alva teams headed to the Pioneer Tournament in Waukomis Wednesday. The games were moved up a day to avoid predicted bad weather.

The Alva Ladybugs were 3-0 going into the tournament to face Enid JV Wednesday.

The Goldbugs were winless at 0-3 after Tuesday's game. The Goldbugs lost to Pioneer and Blackwell in the first two rounds of the tournament ending their play. The seventh place game was cancelled due to the weather.