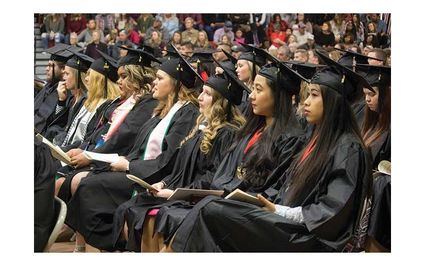 Northwestern students listen to Jane McDermott as they wait to receive their diplomas during the Fall Commencement Sunday.

The death of George H.W. Bush, the 41st president of the United States, led to a week-long public celebration of his life and accomplishments. This influenced both speakers at the 16th annual fall commencement at Northwestern Oklahoma State University Sunday, Dec. 9.

Dr. Janet Cunningham, president of the university, opened her remarks with a Bush quote: "Think about every problem, every challenge we face. The solution to each starts with education."

Cunningham said, "This is a reminder that your true weapon is knowledge. In educating yourself, you have become effectively prepared to make wise decisions in your profession and in your life."

She also quoted Bush, "The American dream is giving it your all, trying your hardest, accomplishing something and then, add to that, giving something back. No definition of a successful life can do anything but include serving others."

Cunningham reminded students, "It's not about how much you make but rather the mark you leave behind."

She concluded, "As we celebrate a life of public service, let this be a reminder to you to put into practice our university motto: Learn Today, Lead Tomorrow."

Cuningham introduced keynote speaker Jane McDermott of Alva. McDermott graduated from Northwestern in 1977 with a bachelor's degree in library science and physical education followed by a master's in secondary curriculum instruction. McDermott was a member of the Lady Rangers basketball team while at NWOSU. In 1987 she became the executive director of the Northwestern Foundation and Alumni Association. Today McDermott and her husband Max own deVine Water and McDermott and Associates. In addition to many other offices, in 2017 McDermott was appointed by the governor to serve as regent for the Regional University System of Oklahoma, the governing board of Northwestern.

McDermott greeted the students, faculty and guests. She said meeting and marrying her husband Max at Northwestern was by far her greatest accomplishment. She credited her mother, also a Northwestern graduate, with fueling her love of education and her commitment to Northwestern.

Looking around Perceful Fieldhouse, the commencement location, McDermott said she played her first collegiate basketball game there, watcher her husband play intramural basketball, attended her first rock concert there and saw her first streaker. Amid laughter, McDermott noted, "That was kind of a big deal in the 1970s." She said she also watched her son, her daughter and a niece graduate in the building. 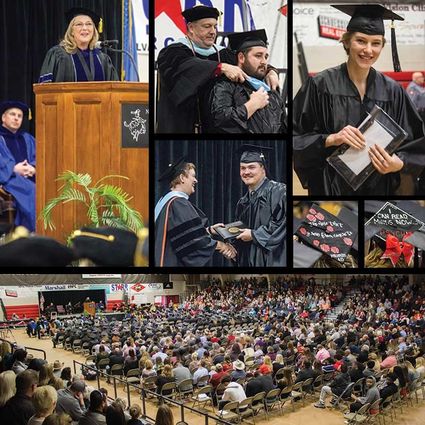 TOP LEFT: Jane McDermott from Class of 1977 gave the address to the Class of 2018. TOP CENTER: Anthony Andrade of Manhattan, Kansas, receives his stole for his Masters in Adult Education Management and Administration. TOP RIGHT: Rachel Davis of Kingston is all smiles after she receives her Bachelor of Arts in Sociology diploma. MIDDLE CENTER: Alex Castro of Cherokee shakes President Cunningham's hand as he receives his diploma for his Bachelor of Science in biology. MIDDLE LEFT: Some students decorated their mortarboards. Rosa Amelia Guel of Los Angeles, California, decorated hers mortarboard with roses and a Bible verse, while Desiree Fritz of Enid, whose BS is in psychology, wrote "I can read minds now" on hers.

Addressing the graduates, McDermott said, "You are a very elite group of Americans as only 30 percent of Americans have a bachelor's degree. You have accomplished a great thing today."

She said Oklahoma's higher education has taken some real financial setbacks over the past few years but she is hopeful with the talk of a change. "It is time for Oklahomans to place a greater value on education."

McDermott offered "a little bit of advice" to the graduates. "I would encourage each one of you to maintain a healthy lifestyle. Exercise more, eat better, get good rest and most important, drink lots of water.

"Find a healthy outlet for your stress. Travel more and give generously of your time and your resources."

McDemott said, "In closing, my challenge for each one of you as you embark on the next chapter of your life, let's strive to be a little bit more like George (H.W. Bush) – kind, loving, funny, forgiving and optimistic.

"This quote of his is one of my favorites and reminds me of higher education: 'We are a nation of communities, like a thousand points of light in a broad and peaceful sky.'"

She said while in the White House, Bush founded the Points of Light charity, which is dedicated to encourage volunteerism. "I hope each of you today will volunteer and give back for all that has been given to you. May God bless America and may God bless each one of you."

With that, the fall graduating class filed across the stage accepting their diplomas.