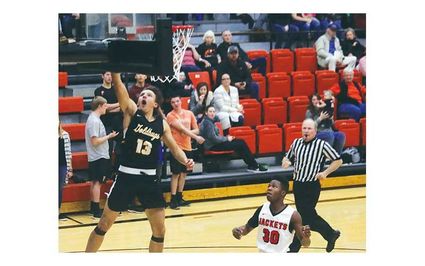 Alva's Dalton Rose breaks away from the pack for the lay-up versus Fairview.

The Alva Goldbugs lost 51-50 to Fairview after being up early in Friday's match on the road. 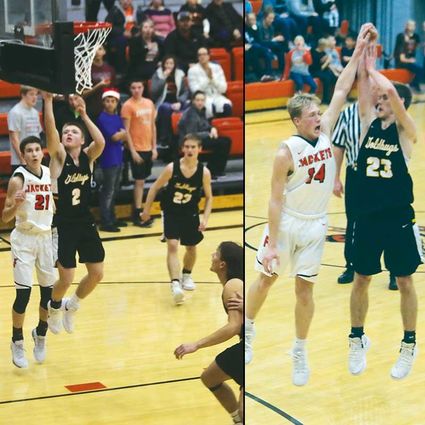 The Goldbugs featured two double-figure scorers in the match up. Reece Martin led the way in his first start for Alva with 12 points, followed by Dalton Rose who also poured in 12 points; Mitch Meyer finished the game with nine points. Kaden Hensley ended with six points, all in the fourth quarter.

Fairview countered with 24 points from Kade Dillard, 14 in the second half, followed by 10 from Kolton Schmidt, and eight points from Weston Church.

Alva jumped out to 17-5 in the first quarter. Fairview outscored them 18-13 in the second quarter. Alva went ice cold in the third; the Jackets outscored the Bugs 15-0. Alva responded in the fourth quarter, outscoring Fairview 20-13. Mitchell Meyer scored a half-court shot to end the game.

Coach Feeley said, "We were extremely impatient in the third but began to settle in the fourth."

The Goldbugs will play their next two games at home this coming week, Dec. 18 versus Tonkawa and Dec. 21 versus Perry.