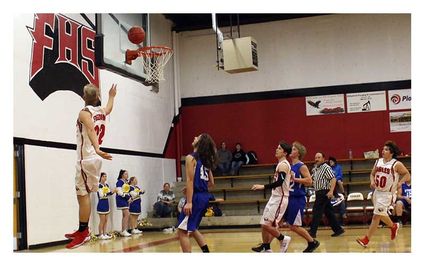 Myles Nixon (22) makes a lay-up during the Eagles' win against Wynona.

The Eagles also won big with a 66-28 victory. The Eagles took a 22-6 lead in the first quarter and never looked back. Myles Nixon had a double-double with 11 points and 12 rebounds. Defense was led by Kris Fargo and Blake Lee, who had seven and six steals respectively. Other scorers were Fargo with 30, Lee with 11, Bolar with nine, Cook with three and Lopez with two. 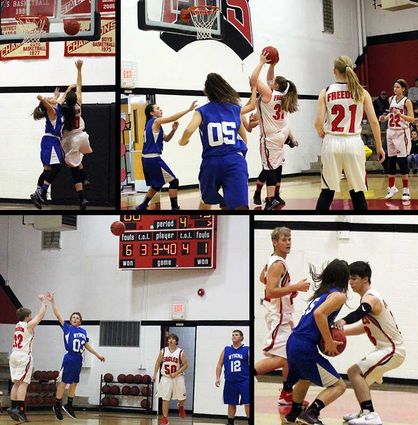 TOP LEFT: Jaci Weber (32) pulls down a defensive rebound during the Lady Eagles' victorious win over the Lady Yellowjackets. TOP RIGHT: Freedom's Arianna White (10) lays it in for two points against a Wynona defender. BOTTOM LEFT: Blake Lee (13) plays defense against Wynona player No. 25. Myles Nixon (22) and Lance Bolar (12) beat the offense down the floor. BOTTOM RIGHT: Myles Nixon (22) makes a lay-up during the Eagles' win against Wynona.