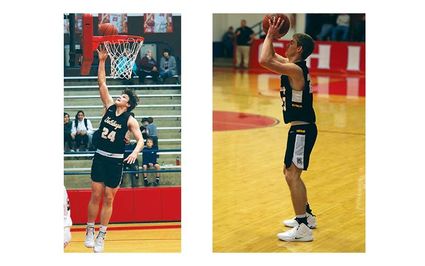 LEFT: Cameron Gordon breaks away for the fastbreak lay-up. RIGHT: Donald Blalock scores 16 points in the ball game versus Kingfisher.

The Goldbugs beat Fairview 56-39 in Friday's match-up at the Wheat Capital Tournament.

The Goldbugs led the Yellowjackets 12 to 11 at the end of the first period. Alva's offense continued through the second quarter, outscoring Fairview 16-9 and taking an eight-point lead (28–20) into halftime. Fairview made a small run in the third period outscoring Alva 10 to 8. The Goldbugs' offense picked back up in the fourth as the Bugs outscored the Yellowjackets 29–9 in the fourth period.

Fairview's Cade Dillard scored a game-high 20 points, seven in the second half and one point in the fourth period.

The Alva Goldbugs won the fifth-place game 55 to 43 versus Kingfisher's junior varsity team Saturday afternoon in the Wheat Capital Tournament.

Donald Blalock led the Goldbugs in scoring with 16 points (four of five from deep). Twelve of Blalock's points came in the first half as he made two three-point baskets in both the first and second quarters of the ball game. Cameron Gordon was second in scoring for the Bugs as he had 13 points, followed by Reece Martin who added 11 points in this contest. Dylan Whitely also had nine points and 10 rebounds in this ball game.