Ladybugs fall to Perry and Blackwell in Wheat Capital Tournament 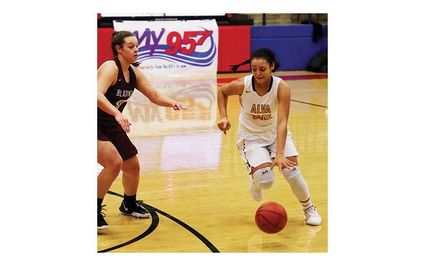 The Ladybugs fell to Perry 61-37 in Friday's match-up at the Wheat Capital Tournament.

The Lady Maroons of Perry jumped out to an early lead versus Alva in the Friday afternoon game. Perry outscored the Ladybugs 17-12 in the hard-fought first quarter. Alva responded in the second period; the Ladybugs outscored Perry 19-13 and took a one-point lead (31-30) into half time.

Perry opened the second half with a 13-0 run. The third period was marked by turnovers. The Ladybugs were outscored 15-6 in the quarter. Alva continued to turn the ball over early in the fourth quarter and Perry was able to capitalize on those opportunities. Perry pushed the lead out to double figures and Alva was not able to recover from the mistakes made. Coach Horn decided to go with the junior varsity players to finish the game. Alva was outscored 16 – 0 in the fourth to finish the game. 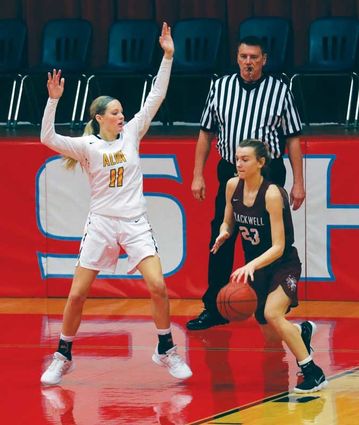 Payton Jones blocks the shot of the Lady Maroon player.

The Blackwell Maroons led the Ladybugs at the end of the first period 14–10. Alva found their offense in the second quarter of this game. Alva and Blackwell scored 15 points in the quarter. Alva's offense was strengthened by Acacia Charles. Charles made three three-point baskets in the quarter. Stephanie Spellman added one three-point basket. Payton Jones went one of two from the free-throw line followed by a fast break lay-up. The Ladybugs were down 29 to 25 going into half.

Alva played a strong second half as Blackwell outscored Alva 10–7 in the third period. Alva kept the Lady Maroons scoreless in the forth period, scoring seven to Blackwell's zero points. Alva was able to tie the game up in the forth at 39-39 to force overtime.

In the overtime period Blackwell scored five points and Alva simply couldn't score any baskets. Alva had a handful of turnovers that cost the Ladybugs the game.