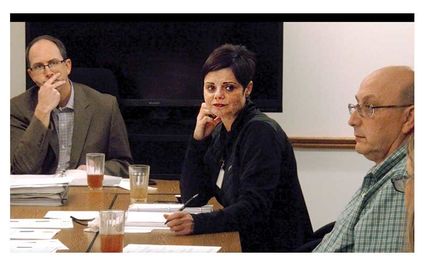 Share Medical Center is weighing the pros and cons of staying with the same software for electronic health records (EHR) or changing. CFO Kandice Allen said Jean Sands and Melissa Spaulding of SSM (St. Anthony's) were in Alva Jan. 8 to review Share's upcoming IT needs and projects. By the end of February, they will provide the hospital with a quote along with the benefits of EPIC software.

Alva Hospital Authority Chairman Jason Gaisford said the hospital is "up against the wall" because current servers are out of date and reaching the end of their life. He said the hospital is facing costs of over $2 million. Whether Share stays with Meditech software or changes to EPIC, they will be facing a large expense. The board will need to decide what can be done to save money in the upgrade.

Dr. Benjamin Hicks, hospital chief of staff, said Meditech is DOS-based while EPIC is Windows based. In addition, almost all major hospitals in Oklahoma use the EPIC software. Switching to EPCI would make it much easier to share information.

CEO Allen added that it would behoove the hospital to switch to EPIC for the benefit of Dr. Robert Rader and the telemedicine group from St. Anthony's. "We don't have a choice in this," Allen said of the EHR update.

In other technology news, Allen said the new website has been rolled out. The hospital needed to post pricing on the site to comply with the new price transparency law by Jan. 1. Mark Nichols in the hospital's IT department designed the new look at smcok.com. Allen said the pricing is of limited value to the public. To get more specific information, she encourages people to contact the hospital's business office. A form on the website offers the opportunity to leave a request for the business office to call.

The swing bed program continues to be strong at the hospital. There were ten admissions in November with six being transfers from outside facilities. Four were admitted from the hospital's acute care unit. The average stay for nine of the patients was 6.67 nights with one patient remaining in the unit.

Ashley Ferguson visited four of the facilities in Enid that often receive patients from this area and make frequent referrals back to Alva's swing bed unit. They were provided with information about Share's facility and capabilities.

In December, there were ten admissions with six being transfers from outside. Average length of stay for four patients was 8.2 nights with six remaining in the unit at the end of the month.

Although the hospital had a net operating loss for December, CFO Kevin O'Brien is optimistic for the future. Since the hospital earned critical access hospital (CAH) designation, their reimbursement rate has been on the low side. After several months of operation, that rate will be adjusted upward to better match the actual rates. O'Brien said the hospital "will be in good shape when the rates get readjusted."

Hospital operating expenses excluding salaries, benefits and depreciation for December totaled $313,937, a decrease of $43,424 compared to the prior month. Hospital salaries and wages for December totaled $405,875, which was an increase of $16,618 compared to the previous month. O'Brien noted that a contract physician was hired to cover the emergency room during the holidays.

Dr. Hicks made motions, passed by the board, to reappoint Barry Rockler, MD; Mark McCurry, MD; and Mikhail Lomize, DO to courtesy staff.

Rita Goodrich reported that Share Convalescent Home had a net loss for November of $34,921. She attributed much of this to the need to hire contract staff to keep up their level of care. She's hopeful that a new group of CNA's will be finishing training soon and will be available to help alleviate this expense. Last November the net loss was $1,495. For the 2019 fiscal year to date, the convalescent home has a net income of $95,003.

All staff members attended in-service training regarding the plan of correction and deficiencies cited. All the deficiencies were in substantial compliance as of Nov. 21. Goodrich said they will continue to monitor compliance and adjust procedures based on the audits completed.

The nursing home has three new CNA's. They are orienting three new CMA's who have finished their training.

Administrator Kelly Parker reported The Homestead occupancy was up 4.9 percent in December compared to December 2017. Currently the Homestead has 41 residents with two more on holiday travel and two who are out for health or medical issues. In addition, a Share Medical Center provider and three SMC contract staff occupy apartments.

The super two bedroom conversion with a ceiling-mounted lift that can run on a track from bedroom to bathroom is expected to be finished in February and is already reserved.

The Homestead Café continues to do well, serving 2,551 meals to residents and 314 to guests. Meals on Wheels totaled 308 which Parker said is up a lot. He said it's a really good service with meals delivered twice a day. The café provided 1,368 meals for the county jail, also an increase. Employees were served 235 meals and another 70 meals were provided for catering, meetings and administration.

Bridget Cosby gave the St. Anthony's report. She said CEO Allen will be attending the upcoming St. Anthony's retreat. At Cosby's suggestion, the board decided on an SMC strategic planning retreat to be held Feb. 21 at 5:30 p.m. Cosby also said the switch to EPIC for health records was "critical."

Chairman Gaisford said the hospital authority March meeting will be moved to March 26 instead of the 19th.