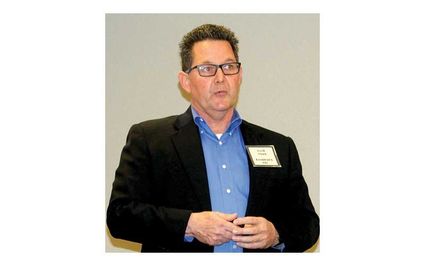 NEW VAP CEO TALKS CUTTING EXPENSES AND GAINING NEW CUSTOMERS – Value Added Products' (VAP) new CEO Geoff Clark gives a report to stockholders that had many saying it was the best they've heard in recent years at the 19th annual meeting Saturday in Alva. He talked in specifics about how he and staff are cutting expenses, gaining new customers and putting out quality dough products in the form of pizza crusts, croissants, dough sheets and more.

Stockholders in Alva's Value Added Products (VAP) were in for a few "firsts" at their 19th annual meeting Saturday. For the first time the meeting was held in the comfortable setting of a conference room at the Northwest Technology Center in Alva.

The other "first" was a report from new CEO Geoff Clark, who made a corporate presentation, likely similar to his days as an engineer with Raytheon. A native of the Enid/Garber area he returned home "and VAP found me," Clark said.

Listening to and watching Clark's powerpoint presentation, he's a proponent of cost management and sticking to a budget. A graduate of Oklahoma State University, Clark laid out his goals for VAP in the next year and his economic mission to the stockholders. Of course details of that information are private since VAP is a privately owned cooperative and not shared publicly.

Here's a quick reminder of the cooperative's history. As VAP was created in the late 1990s, those who envisioned the dough making plant worked closely with local economic development boards to secure low interest loans through the USDA, etc. About 1999 area farmers and landowners started investing in the cooperative as a way to add value to their (predominately hard, red winter variety) wheat, the predominant crop in the area. Their investment was to provide jobs for the local economy; to get a tax break on their investment; with the possibility of someday seeing a return on their investment.

Currently the Alva plant employs 53 people. The audit report approved at this meeting by stockholders was for VAP's fiscal year that ended May 31, 2018 and 2017. That showed a $2.2 million payroll and payroll benefits that help stimulate the Alva area economy.

Marty Shaffer of Campbell Shaffer and Company P.C., presented the audit which showed a loss for the year ending May 31, 2018 and 2017. Clark listed his goals which starts with management by data and said the company needs to be "predictable and profitable." He spoke of many ways he's already cut expenses (in the 11 months since he arrived), such as saving energy by working with OG&E and being one of nine companies who received a federal grant.

He listed many other cost saving measures they've taken such as packing efficiency; methods of sanitizing equipment; improving products with cost-saving tweaks to ingredients; a savings in employee insurance (better coverage, less expensive by eight percent); and many more.

The CEO plans to increase business by focusing on and retaking customers in Oklahoma and the region. The focus is on "Made in Oklahoma." He told of specific customers, connections and targets. Clark said VAP's goal is to be the most admired proofed and unproofed dough manufacturer, as you'll see on their website http://www.vapcoop.com.

VAP makes pizza crusts, dough sheets, croissants and bread rolls. The company is known for the rolled-edge crust they make. Stockholders and the general public voiced their desire to again be able to purchase these mouthwatering items locally. Clark said staff is working to make that reality. In keeping with tradition, shareholders at the meeting enjoyed samples of the various types of products made with VAP's dough.

He was especially pleased to announce that VAP again received a "AA" BRC certification which is the internationally recognized mark of food safety and quality. 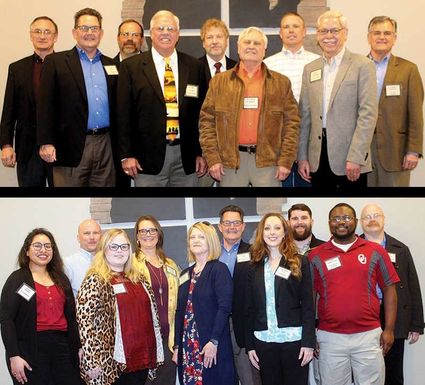 VAP is currently working with NWOSU students on a marketing project. The students have created an ingeniously designed new logo for the dough company which says "VAP, Rising Above the Rest," and is just weeks away from final approval. In fact the NWOSU students are revamping VAP's entire website.

"It's just costing us pizza," Clark said with a chuckle and said what an excellent job the students are doing.

Clark also complimented his staff and how well they work together. VAP has a social mission to encourage staff such as an employee of the month program. He said employee turnover had been as high as 110 percent and has now dropped to 25 percent.

VAP Board President Bob Baker presided over the meeting. He presented a plaque of appreciation to longtime treasurer of the board Terry Graham who is retiring his position. Serving on the board since 2002, Graham missed only one meeting in those 17 years, Baker said.

For Graham's replacement on the board, the stockholders approved Jay Lohmann who is general manager of Wheeler Brothers Grain in Alva. Other board members attending the meeting were: vice president Dean Goll (whom Baker said is the longest serving board member) and directors Ronnie Truelock, Dusty Albright, Gordon Karber and Steve Sterling. Directors who were absent are: Gregg Glass and Kent Kisling.

The board seats of Goll, Truelock and Kisling were up for reelection. All were approved by acclamation.