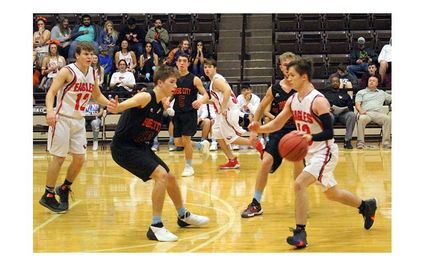 Blake Lee (13) handles the ball throughout the competition.

With sirens blaring and horns honking, a small parade of vehicles followed the Eagle bus out of town as the Freedom Eagles traveled to Elk City to compete in the Regional Basketball Tournament on Feb. 14.

The Freedom Eagles got a bye in the first round of the district playoffs and met the Balko Bison in the second round. The Eagles came up short of a win by 3 points, but they still got to the Class B Regional Playoff Tournament.

The Eagles handled the Aline-Cleo Cougars, 49–29, to advance to the second round against the Boise City Wildcats. The contest was quite the battle, and at half-time the Eagles led by 1 point. Blood, sweat and tears were left on the court and the Eagles fell short of victory, losing 61–49. We are proud of our team and their hard work.

The Lady Eagles lost their first game in district playoffs against the Arnett Lady Wildcats, leaving their playoff hopes crushed. The final score was 77–32.

(More photos can be seen under the Photos tab at the top of the website.) 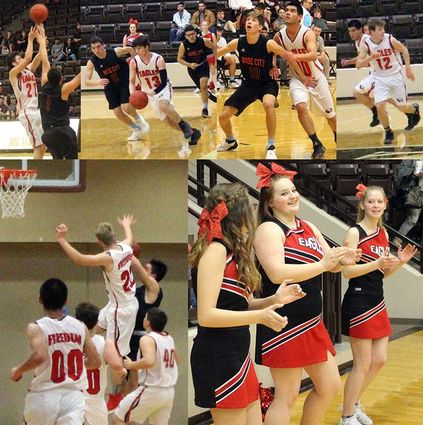 TOP LEFT: Kris Fargo (21) takes a shot beyond the arch, past a Boise City player (1), and – swoosh – makes it. Fargo was good for 18 points, eight rebounds, seven assists and seven steals. NEXT: Blake Lee strips the ball from a Boise player and heads down court. NEXT: Pedro Iberra (00) fights for position to rebound. TOP RIGHT: Lance Bolar (12) and Pedro Iberra (00) race down court for a fast break. BOTTOM LEFT: Myles Nixon (22) manages to block the Boise player's shot attempt. Nixon had two blocks for the game. BOTTOM RIGHT: "Go. Big Red!" The Freedom cheerleaders, Madison Rhodes, Jaci Weber and Tamlynn Link, keep the crowd in it.