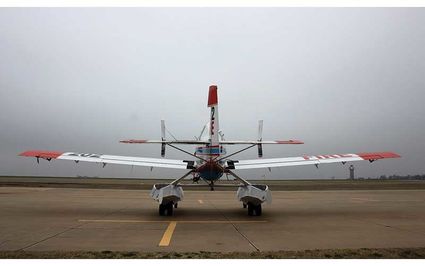 Photographed from behind, the Fire Boss stands in stark contrast to the grey sky behind it.

A pilot flying north from an Olney, Texas, aircraft factory was about 276 miles in on a 950-mile trip to Appleton, Minnesota, when he decided to make a brief rest stop. He called Alva's Regional Airport and the facility's manager, Greg Robinson, told him to fly in – that he would stay there a little late to welcome him. The pilot, Brent Voris, landed in Alva at about half past five and was greeted with a fuel truck and given a rundown of Alva's dining and lodging establishments. 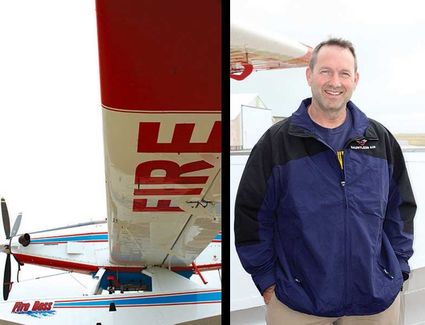 Among the pleasantries, the uniqueness of Voris' aircraft did not go unnoticed. It boasted the word FIRE in big, bold, red letters on the wings' underside, and its huge floats proudly supported the plane's body. The plane was an AT-802F Fire Boss: an amphibious scooper air tanker built for aerial firefighting. Voris, from Florida, revealed he was a firefighting pilot, working for a company called Dauntless Air out of Minnesota.

The pilot stayed overnight Thursday, and on Friday morning a low cloud ceiling reduced visibility enough to prevent the Fire Boss from departing for another night. Using the vehicle provided by the airport, Voris killed time around town, even stopping to get a haircut.

"Alva is a nice town and everyone seems really friendly," he said. "The airport is one of the nicest I've seen, especially for a small town. Greg [Robinson] was so helpful and accommodating. I really enjoyed my stay here."