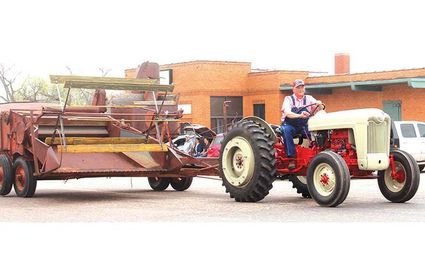 A STEP BETTER THAN HORSE-DRAWN TO GATHER THE GRAIN – Jerry McNamar was a vital part of the committee that brought the Harvest Brigade theme to Kiowa's Pioneer Days Saturday, as Kiowa was known as Combine City USA for decades. He drives a 1953 Ford Jubilee Tractor, so named for its Golden Anniversary. McNamar pulls a 1938 Massey-Harris Clipper that was originally owned by Grover Lychliter north of Hazelton. Ron and Kristi Molz own it now, McNamar said. 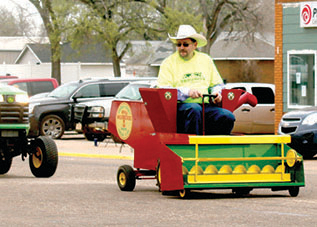 MINI COMBINE USA – During Kiowa's Pioneer Parade Saturday the emphasis was on the Harvest Brigade – and did they ever have a brigade of vintage combines that made it down the street. Kiowa man and longtime harvester Jack McCreery lived in Clearwater many years and was a Shriner in Sumner County. The harvester helped design these unique wheat whacker parade units the Shriners drove in countless parades through the years. The novelty combines were the perfect addition to Kiowa's harvest theme parade which McCreery was instrumental in helping organize. They are driven by (from left) Randy Lohmann, Tom Starks and Brock Thurman.