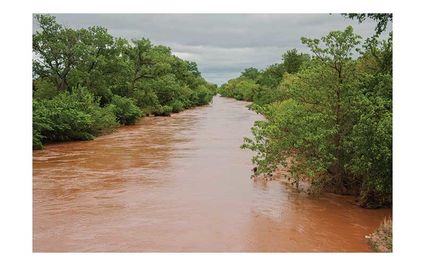 The Salt Fork Arkansas River, north of Alva, is full and rushing. Nearly 6 inches of rain has reportedly fallen in the Alva area in the last 10 days.

Water-logged parts of Oklahoma can't look forward to a break in the rain until Sunday, according to the weather forecasters. But it will be a short break as precipitation chances appear again on Tuesday.

Gov. Kevin Stitt has added 14 more counties to the current state of emergency declaration including Woods and Alfalfa counties. The additional counties were included after flooding and tornadoes reported Tuesday and Wednesday.

The City of Alva has barricaded East Flynn Street in the 300 block at the intersection of Meno Street. The abundance of rain has caused a washout under the pavement.

There have been numerous reports of damage from water in basements. Insurance agents are fielding calls about flood coverage. The short answer seems to be, if you don't have specific flood insurance you're probably not covered.

In a meeting at the Alva Recreation Complex Wednesday, Courtney Nessarella reported pumping many gallons of water off ballfields. A two-day tournament is scheduled for the weekend. Games may be postponed or cancelled if rains continue as forecast.

In the past ten days, Alva has recorded 5.92 inches of rain, according to the Oklahoma Mesonet. The majority of that came on Tuesday and Wednesday this week with a reading of 3.55 inches in two days. 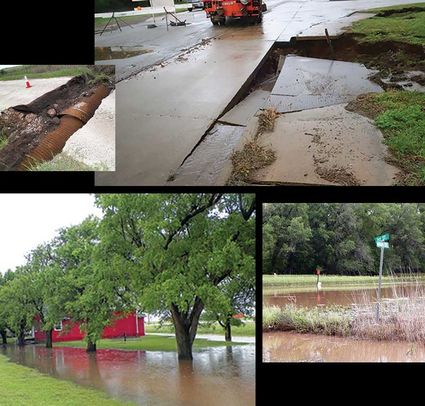 Top right: Rain totaling 3.55 inches over Tuesday night flooded Alva streets. East Flynn Street has been closed at the intersection with Meno Street due to a washout of the roadway. Middle left: A three-foot-wide slice of Cotton Road, between county roads 470 and 460 near Dacoma, was washed away in the Wednesday flooding. Bottom left: The Hopeton Community Center is surrounded by flood waters Wednesday afternoon – just as the rain starts up again. Bottom right: The turn from Craig Road into Dacoma was completely under water Wednesday afternoon.

Other area seven-day totals were Cherokee with 7.49 inches, May Ranch (northwest of Alva) with 5.30 and Freedom which seems to be in a dry spot with 2.51 inches.