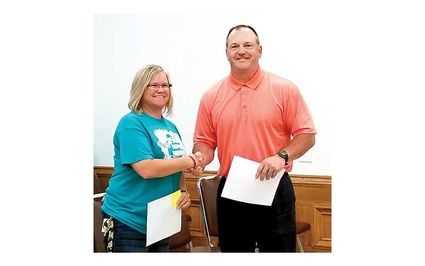 The Alva City Council held a special meeting Thursday at 5:30 p.m. after weather delayed their regular Monday session. Melody Theademan was sworn in for another term as city clerk.

Dr. Bo Hannaford gave a report on the personnel committee meeting. He presented the employee recognition award to Courtney Nesseralla who directs the Alva Recreation Complex (ARC). Hannaford said following the April 20 tournament, the city received many comments from out of town teams on how well the tournament was run, how nice the fields and facilities were and how much they enjoy coming to Alva to play. Hannaford said this was good for the city and "we couldn't do that without Courtney and her staff out there." He said the ARC provides a lot of great opportunities for Alva's young people. "The economic impact when we have those teams that want to come to Alva is really important to us," he concluded.

Nesseralla will receive dinner for two at the Alva restaurant of her choice, two tickets to the Rialto Theatre and a day of special vacation.

The council acknowledged the receipt of a DEQ permit for the construction and rehabilitation of a lift station with two 130 gpm submersible pumps. The city is rehabilitating a sewer lift station on Skyline Drive, replacing the current lift that has become difficult to maintain. As a part of the project, Myers Engineering developed and submitted plans to DEQ for water lines which will attach to the existing water system. Bids are being advertised with plans to have a recommendation by the June 17 meeting. Estimated cost of the project is $120,700.

To encourage investment to improve business buildings in Alva, the city council approved participation in the Economic Development Incentive Grant program. The city is including $50,000 in the next fiscal year budget for this grant. The city will provide matching grants of up to $5,000 for eligible improvements to the appearance of a building façade and retail space in Alva. The applicant is reimbursed once the project is completed in accordance with program guidelines. Applications must be submitted and approved before the work is done.

Council members approved engaging Angel, Johnston & Blasingame, P.C. to conduct the audit for fiscal year 2019-2020 for the city and the Alva Trust Authority. The cost will be $19,850. This is the fifth year of agreements with the firm.

The council approved the reappointment of Kelsey Martin to the Red Carpet Country Association Board for a three year term.

Kimberly Baugh was appointed to the Alva Hospital Authority. She will fill the unexpired term left vacant by the resignation of Steve Ward who has moved outside the city limits. Ward served on the board since 2016. Mayor Parker said Baugh has experience in healthcare finance. Her term will end in October 2020.

April Ridgway has been appointed to the Alva Library Board for an unexpired term ending June 2022. She will replace Dr. David Kovarovic, a longtime member of the board who resigned. 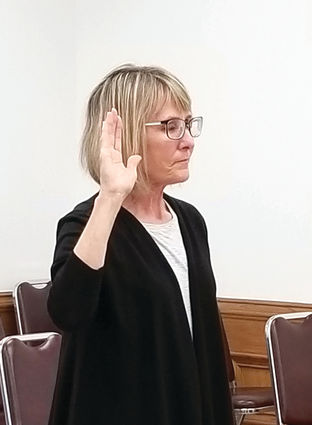 The council held an executive session to discuss contract negotiations with IAFF Local 3782 Alva. The union represents local firefighters. No action was taken on the contract when the council returned to open session.

After the council adjourned, the Alva Utility Authority met. They approved claims totaling $130,663.26 and payroll expenses of $61,765.75 as well as minutes of the last meeting.

The Alva Economic Development Authority held the last meeting of the evening, approving minutes of the April meeting, claims of $55,854.85 and payroll expenses of $18,067.03. They also approved the NWOSU spring semester scholarship billing of $236,589.43.