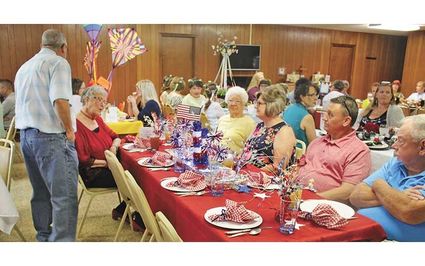 The July table is sponsored by Stansberry Welding and The Other Place of Alva adn decorated by Shonna Blakey.

Though Freedom is small, its history is long. That's why the Freedom Museum holds its annual fundraising supper every summer.

On Friday, June 21, the Freedom Museum held the annual fundraising supper at the Methodist church. Approximately 75 people attended from around the community and numerous donations were accepted from in-town and out-of-town businesses. The theme of this year's supper was months of the year, and tables were sponsored by surrounding businesses, and then decorated by those that represent those businesses and/or the museum board members.

Before the dinner, attendees were able to put tickets in for a raffle for different items donated by various businesses. After the dinner the ticket winners were announced, items donated included desserts cooked by community members that are usually highly sought after in the community. Items also included clothes, gift cards, jewelry, house décor, and outdoor patio furniture and a grill.

Eleven tables filled the church dining area and each table had their own unique decorations along with their month.

Businesses paid $100 to sponsor a table.

"The elaborate table decorations are a big part of having the event," board member Judy Devine said. "We want to offer those who attend an opportunity to dine at a unique, theme-inspired table setting."

February, sponsored by BancCentral, featured a Valentine's Day theme and was decorated by Chonda Dees.

March, sponsored by The Store, featured a basketball March Madness theme and was decorated by community members Julie Russell and Sue Reed.

April, sponsored by Woods County Abstract, had a colorful theme with kites and flowers and was decorated by Judy Devine.

May, sponsored by Bank of Freedom, was decorated with flowers with each table member receiving her own flower crown; it was decorated by Sharon Walker and Chris Gagnon.

Circle B Meats sponsored the June table, which was decorated with all the flags of the United States and was decorated by Sandy Wimmer.

Stansberry Welding and The Other Place of Alva sponsored the July table with an Independence Day theme, and it was decorated by Shonna Blakey. 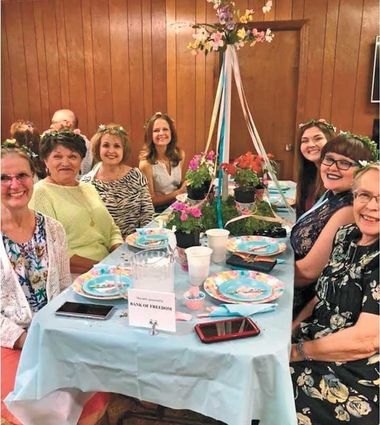 August featured a back-to-school theme with cafeteria trays and school supplies filling the table. This table was decorated by Charla Turner and sponsored by Community Bank of Alva.

The September table was stationed by the door and those who sat there took everyone's ticket as they walked in.

A Halloween theme with a boiling cauldron sat at the October table, which was sponsored by Cargill Salt and decorated by the Cargill employees.

And finally, December, which was sponsored by Alfalfa Electric Cooperative and decorated by Lola Starbuck, featured a Christmas theme.

Approximately $3,000 was raised between the people who attended and the donations from surrounding businesses.

"The board was very pleased with the turnout," Devine said. "We appreciate the community's support in our efforts to keep the Freedom Museum open and an asset to our town."