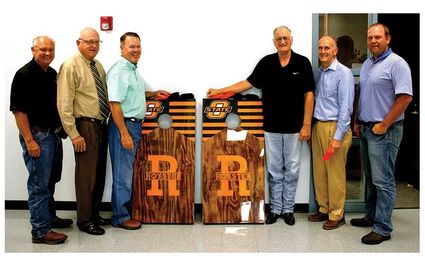 Avard Regional Rail Park Authority members (from left) Bob Firth, Ed Sutter and Stan Bixler stand on one side of former member Joe Royster while the other two authority members, Todd Holder and Allan Poe, stand on the right. Royster was presented with a unique token of appreciation Tuesday night for his service to the board.

Members of the Avard Regional Rail Park Authority began their monthly meeting this past Monday night by honoring former member Joe Royster for his years of service on the board. They presented him a custom-made cornhole game with an Oklahoma State University motif and took time to gather for a picture.

The agenda next called for discussion and possible action regarding the rail park's infrastructure expansion. At the last two meetings, authority members, with Sonja Williams at the helm, discussed rail infrastructure and a possible trans-load facility. Ultimately they arranged for an engineering firm to provide an accurate rendering of what the park may look like with the expansion.

"The estimate we were working off when we were going for our infrastructure money was $7,750,000," Williams said, adding that with the addition of an alternate track, plus contingencies, the figure bumps up to about $8,300,000. "That's with that alternate track. Without the alternate track, we're at $5,600,000."

She went on to say that it was those numbers she would be using in applying for grants or other monies out there (maybe through the Department of Transportation).

"This [expansion] opens up the park to be more usable ... it makes good use of the facility," Williams said.

One of the difficulties the rail park has been facing is a lack of water. A firm in the past advised the board that they would be unable to utilize Avard's rail park because of that reason. Williams, a strong advocate for the infrastructure upgrade, said the changes would help accrue tenants and help those tenants with upgrades that will benefit the rail park as a whole (like getting water). "For us to move forward, we have got to have water ... water is the key."

In looking through water loss statements from Sept. 1, 2018, through June 30, 2019, it was discovered that there was a 73.14% loss just in the month of June. Margins had previously been about 50% but started climbing throughout the last few months.

"This [water system] is the whole lynch pin of the park. It hooks up the whole county on the water, it provides water for the park. We can't do anything in the park without this water. It is the lynch pin of this whole thing," Bob Firth chimed in. "It's good to finally have this information," he said about the rendering in front of him. He acknowledged Williams' work on the project and emphasized the importance of obtaining the $7 million.

The end of fiscal year means it is time to make bi-annual payments, Williams said, including that of a $5,000 accrual for the Center of Economic Development Law and $7, 727.50 to WCEDC. A payment to the county commissioners for the General Obligation Bond ($15,625) was also due too.

Other expenses mentioned were the monthly pledge, an Oklahoma Natural Gas bill, the Graham's Engineering bill of $4,120 for the rendering, and a track inspection (in which there were no defects) bill for $150. The Association of County Commissioners of Oklahoma payment discussed at last month's meeting still warranted payment as well, but with a modified amount (a $1 difference that was amended in the minutes).

"It looks to me like if we took our cash from the bank, plus the accrued, and paid everything off, then our total indebtedness would be down right at about $300,000 – if we use the cash we zeroed out," Todd Holder said. Williams, breaking down some of the debts, agreed with him. Sutter moved for approval of the finance report and the motion carried.

In new business, Sutter mentioned the recent passing of former board member Les Kamas and proposed pursuing a memorial token of recognition for his service. An agreed upon budget was decided on and the meeting was called to an end thereafter.