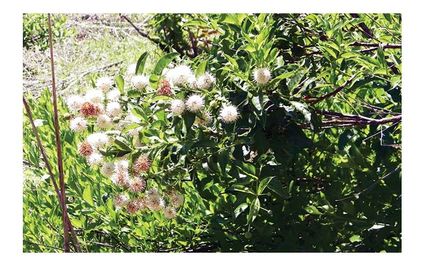 These fuzzy flowers of a brilliant pale yellow are all over the place in the wildlife refuge.

The floodwaters from the rains of May and June are still receding at the Salt Plains National Wildlife Refuge, according to Colby Wyatt, the refuge's administrative officer. He and the other staff there still haven't been able to access parts of the refuge, so what effect the flooding will have on the refuge's flora and fauna, well, "it's really too early to tell," Wyatt said.

Huge flocks of long-legged, long-billed western cattle egrets with their bright white and light yellow plumage can be seen covering the banks and hills on the west side of the wildlife refuge, especially at dawn and dusk, said Wyatt. Drive east on State Highway 11 toward the refuge, and pull off onto one of the wildlife sighting areas. Bring your camera and binoculars.

The cattails add a layer of brown to the rich palette of greens and pale yellows in the wildlife refuge.

During the day, the interior of the wildlife refuge is like a wetlands wonderland, with rushes and cattails, bright flowering bushes, waving willows and cottonwoods, and more kinds of grasses than you can name. Although most of the wildlife is out of sight during the middle of the day, you may still glimpse a couple egrets standing on long legs in a dark green pond, or watch a big bluish heron flap lazily out of view just as you get your camera ready to use. To find out walking trails and an auto tour, visit the refuge's Facebook page.

At the Great Salt Plains State Park, farther south on SH38, the fish are really biting and the sandplum thickets are having a bumper crop, said park staff, attributing the abundant life there to the two months of heavy rains. Be prepared, though: the mosquitoes are also out in force, park staff said.