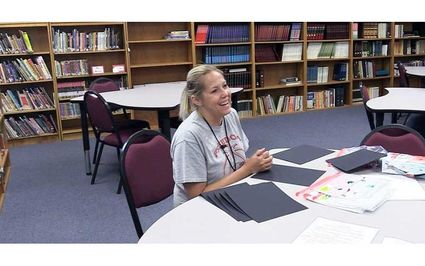 Freedom Schools FACS teacher Darci Immell smiles as the school board congratulates her on her hard work in winning the $15,000 grant to purchase an electronic baby simulator system to teach responsible infant care to her FACS students.

The Freedom School Board called a special meeting Tuesday evening with a number of personnel issues on the agenda. It was the first school board meeting since the departure of former Superintendent James Miller.

Before going into executive session to address the personnel matters, three school policy changes were approved.

The board congratulated teacher Darci Immell on pursuing and receiving a $15,000 grant to use with her Family and Consumer Sciences students. The grant is to a RealCare Electronic Baby Simulators package – a program in which students are issued "babies" that have a digital component that will provide data on things like how long the "baby" cried before it was tended to (e.g., fed, changed, burped or rocked), and other such data that will allow Immel to see how well each student managed the care of its infant. The babies are designed not only to cry when they need tending, but also to coo when their needs are met.

And the babies are programmable, Immell said, adding, "I told the kids they have to be nice to me or I'll give them a colicky baby," at which the board members laughed.

The package of materials includes five electronic baby simulators, workbooks, an HP laptop with software that will let Immell monitor and evaluate the students' performance, webinar training, a baby charging case, and miscellaneous baby paraphernalia, such as a diaper bag and receiving blankets, and car seats with an electronic use detector.

The board went into executive session to discuss an individual to act as interim superintendent and that person's possible salary, as well as to discuss applicants for open certified teaching and coaching positions. Upon return to open session, the board said no vote had been taken.

The board voted to hire Samantha Wilson to teach third and fourth grades and Austin Beene to fill an open coaching and teaching position, both with temporary contracts. Bryant Weber's certified contract was amended, and the career tech funding was increased by $200. They also approved opening a school cook position.

The board discussed the $1,220 average teacher pay raise recently passed in the legislature. Principal Shelite explained that this pay raise was mandated for some school districts, but would be voluntary for Freedom. She said, though, that it was strongly recommended that the pay raise be implemented. If it were, each teacher would not need to receive a $1,220 pay raise; it could be divided up, with one teacher receiving a bigger pay raise and another teacher receiving a smaller one. The raises in total just needed to average $1,220 per teacher. The board voted to table the matter for further consideration – such as whether the school district could afford it.

The first had to do how the pre-K and kindergarten students are graded. Until now they had received grades of Satisfactory and Unsatisfactory. Now they will receive one of four grades: E (exceeds grade level), S (satisfactory), P (progressing) and N (needs assistance).

The policy regarding administering medications to students, had the following addition: "...the self-administration of replacement pancreatic enzymes by a student for cystic fibrosis is permitted with written parental authorization."

The third school policy change had to do with vaping. Along with tobacco use, the use of "a vapor product" is prohibited 24 hours a day, seven days a week, in any school facility or vehicle, or at any school-sponsored or -sanctioned event or activity. A vapor product is defined as "noncombustible products that may or may not contain nicotine" whose mechanism produces a vapor. The prohibited items don't include any FDA-regulated products.

The 2019-2020 school calendar had two changes that the board approved. The first combined two Open Houses that had been scheduled only two weeks apart. The combined open house will be on Aug. 13, just before school starts on Aug. 19. The second moved the Sports Banquet for grades 7-12 from May 17 (which would have been after the end of school) to May 7.