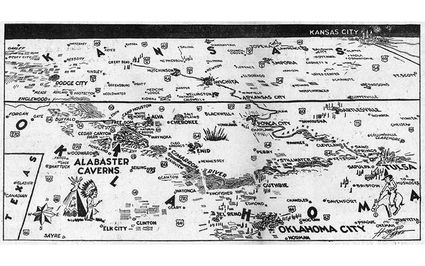 The scenes on the Cimarron Cowboy Memorial in Freedom represent the history of the town's beginnings.

The Cimarron Cowboy Memorial in Freedom was dedicated in April 1950. The murals engraved on the memorial represent the arrival of the vital droves of Texas longhorn cattle, the first sod house, and the dreadful blizzard of 1886 that froze and killed thousands of cattle along the Cimarron River.

Also depicted are the fierce gray wolves that run in packs to kill cattle and the Santa Fe Railroad built into Waynoka and west to Woodward.

Other parts of the mural show the cattle herds that pushed across the flooded Cimarron River near Freedom, Pool Cattle Company, the buffaloes, the lonesome cowboy, the old O-E Headquarters located three miles southwest of Freedom.

Modern ranches and better cattle of today, chuck wagon meals, cattle resting while horses stand nearby, a rodeo scene, and an Indian stomp dance are all shown.

The names on the stone are nearly all early-day cattlemen and cowboys who rode the early day ranges when fences were not in their way.