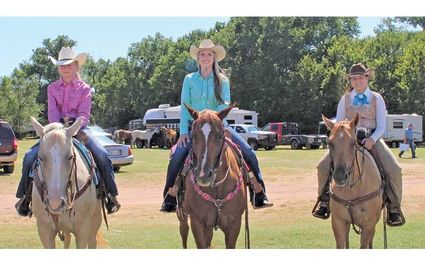 CONTESTANTS – Shay Wilson, Sadie Crusinbery and Kaylen Gaskill pose for a picture before they compete for "horsemanship" in the Freedom arena Thursday afternoon.

Gaskill is the second Gaskill to be crowned a Freedom Rodeo Queen. Autumn Gaskill Nickelson was crowned in 1997. Gaskill wanted to follow in her aunt's footsteps. 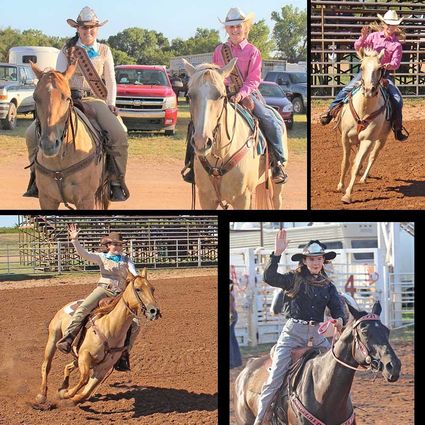 Top, from left: Kaylen Gaskill (left), 2019 Freedom Rodeo Queen, and Shay Wilson, 2019 Freedom Rodeo Princess, pose for a picture after being named queen and princess. 2) Shay Wilson rides during the horsemanship competition. Bottom: Running at a fast pace, Kaylen Gaskill finishes her horsemanship competition. 2) The community lost Cheyenne and her mother, Vickie Limestall, and community member Marvin Nixon in a car accident on Jan. 4, 2019. This photo was taken August 2018.

"I had to wake up really early every day and go door to door and then business to business," Gaskill said. "I'm excited to be a part of this community and this rodeo; I have a lot of family history with this rodeo."

Gaskill is the 16-year-old daughter of Adam and Mary Gaskill and younger sister of Kynadi. She will be a sophomore at Waynoka High School this fall. She is active as an officer in FCCLA, a member of Waynoka basketball and softball teams, and a member of the First Baptist Church of Waynoka youth group.

Wilson is the 11-year-old daughter of Shan and Ronna Wilson and has two siblings. She attends Freedom Public Schools and is active in Freedom school sports and Woods County 4-H.

Crusinbery is the 18-year-old daughter of Shawn and Paula Darr and the late Cary Crusinbery. She grew up in Alva but attended and graduated this year from Burlington High School. Her plans include attending NWOSU to major in nursing.