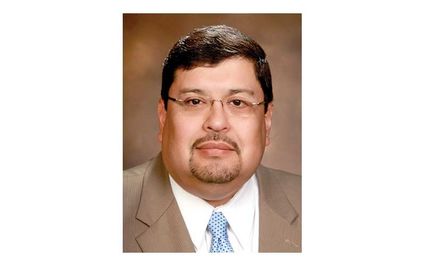 Valencia's last day at the university is Sept. 27. On Oct. 1 he will begin a new career at Rogers State University in Claremore as their vice president for development.

"Northwestern has been my home for so long that it's hard to imagine being anyplace else, but the opportunity presented to me by RSU was one that I had to accept," Valencia said.

"I have had the privilege of working with some exceptional people, from Presidents Cunningham and Struckle, to the members of the senior staff and the talented people who have been part of the University Relations staff."

Dr. Janet Cunningham, university president, reflected upon her time of working with Valencia.

"Steve has been a valued member of Northwestern's Senior Staff and Executive Team for many years," she said. "I will miss his leadership, but I wish him all the best in his new role. I am very proud of Steve as an alum of NWOSU."

A native of Waynoka, Valencia graduated from Northwestern in 1988 with a Bachelor of Arts in mass communications and in 2000 with a Master of Education degree.

Valencia served Northwestern as its part-time sports information director for a year following his undergraduate degree before leaving to work at KWOX (K101) radio in Woodward, KALV-AM radio in Alva, and as a sports editor at the Clinton Daily News and associate sports editor for the Bartlesville Examiner-Enterprise.

Valencia served for four years as the director of public information and publications and as an instructor of journalism at Colby (Kansas) Community College before returning to Northwestern in 1996 as the public relations director and instructor of mass communications/adviser to the student newspaper Northwestern News.

The following summer, Valencia relinquished his duties as an instructor and adviser on the academic side to devote full-time energies to the university's public relations efforts while also adding sports information duties to his role. He served as the SID during the Northwestern Rangers' run to the NAIA Football Championship in 1999, and for their repeat appearance as runner-up in the championship game in 2000. He gave up the sports information duties in January 2003.

Along with his University Relations team, he helped to expand the marketing and communications efforts of the institution through the implementation of a branding program, rebuilding the university's website, improving publications, and leveraging the power of social media platforms. Through their efforts, Valencia and the staff have won numerous awards from the Oklahoma College Public Relations Association.

Valencia also developed and implemented the Vision for Victory campaign for athletics that raised more than $6 million and led to the improvement of several athletic venues. The Northwestern Foundation honored him in 2015 with its Reichenberger Fundraising Award.

As Northwestern's designated legislative liaison, Valencia has played a key role in securing special state appropriations for campus construction projects and the development of the agriculture education program. He has received appointments from leaders in both major parties, including former Gov. Brad Henry and former Speaker of the House Jeff Hickman.

Valencia has held several leadership positions on the Council for the Advancement and Support of Education (CASE), including board chairman for the five-state District IV. He also served as chairman of the Communicator's Council for the Oklahoma State Regents for Higher Education.

Valencia's wife Janet also will be leaving the university and her positions as the Graduate Studies coordinator and Doctor of Nursing Practice administrative assistant.

Valencia has mentioned that it was hard decision to leave after being at Northwestern for such a long time, but he has assured that "we'll always be Rangers at heart because that never leaves you."