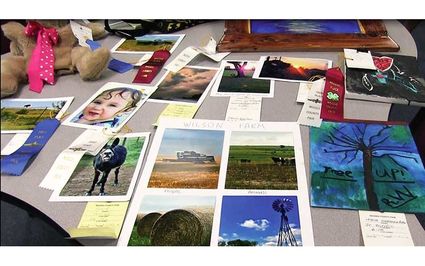 This is one of several tables covered with Freedom students' Woods County Fair projects. After the business of the meeting was done, the board spent a lot of time wandering around looking at the beautiful and ingenious items on display.

The Freedom school board had a varied agenda Monday evening, discussing parent-teacher conferences, county fair results, the ACT vs. the CCRA, and a budding robotics club.

"We're doing it a little different this year so that parents have more of a choice," said Principal Michelle Shelite. "If they can't come one night, they can come the other."

Shelite's also hoping to connect with parents, and other interested folks, to encourage them to take a survey about school testing. The state is requiring Shelite to provide it with community feedback about the school's use of the ACT (American College Test), rather than a CCRA (College and Career Readiness Assessment).

So far, only seven people have taken the survey. Shelite hopes more will – she's required to present the survey results to the state department of education before long.

The board approved providing Freedom teachers with the state-mandated $1,220 pay raise for full-time certified staff.

In other wages-related news, the board approved an extra duty stipend to Principal Shelite for taking over the Alternative Education responsibilities. That stipend is $1,599. Also receiving an extra-duty contract and stipend – for $1,500 – was Austin Beene for his work as athletic director. David Turner was approved as junior class sponsor, for which he will receive a $250 stipend.

OSSBA Conference to be Held at FPS

Superintendent Bryant Weber told the board the OSSBA Conference – which is Oct. 24, 6–8 p.m. – will be held at Freedom Public Schools this year instead of Freedom staff having to travel. Weber said about 80 people are expected to attend the conference, which he said would probably be held in the cafeteria – although what, exactly, those 80 people will be fed has yet to be decided, Weber said.

"I want to brag on our kids – once again," said Principal Michelle Shelite. "We had a lot of kids who entered fair projects and who took part in the livestock shows," she said, gesturing toward the tables in the room that were covered with artwork and other projects.

Some Freedom students are trying to put together a robotics club. They've been raising money from some area residents, and they've event gotten a small grant that will help pay for those first entry fees and registrations, said Shelite. Now they need an account for the money to go into. The board voted to create an activity fund account specifically for the Robotics Club.

The board approved a number of other actions at the meeting, including:

• renewing the contract with Pioneer Long Distance for internet access.

• continuing to calculate school days by the hour method and maintain a minimum of 1,080 hours per school year.

• updating the staff and teacher policy manual's section on Staff Members and Social Networking Sites to prohibit teachers from "Facebooking" with students.

• approving a long list of fundraisers various student groups may want to do during the year.

In addition, the board approved the consent agenda – minutes of past meetings; treasurer's report; encumbrances and warrants for the general, building, and child nutrition funds; and activity fund expenditures.