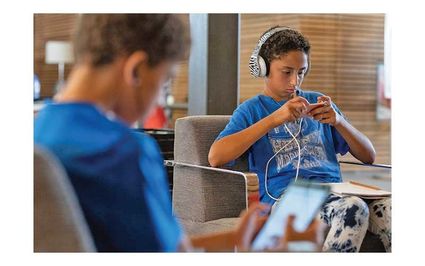 Brylee Brungardt-Davis (right) and her brother Vander Brungardt-Davis (left) work on school at an Oklahoma City library on Aug. 22. They have two siblings in high school that also take virtual classes through the Putnam City School District this year.

Brungardt, of Oklahoma City, said some Putnam City Schools classes had too many students, and teachers were forced to spend more time on behavioral issues and less time on instilling knowledge. She understood teachers' challenges, but "as a parent, you hate sending your kid to school all day to not learn anything."

The family considered homeschooling but decided against it – and ruled out virtual charter schools – because her kids didn't want to miss out on sports and band. So they opted for something else: Putnam City's own full-time virtual program.

In recent years, most of the attention on online education has been on virtual charter schools such as Epic, whose enrollment has soared to more than 24,000. The school is being investigated for alleged fraud and misuse of public funds, which Epic denies.

Less visible is the growing number of brick-and-mortar districts that are offering full-time online programs.

The state doesn't track the number of districts with online courses or how many students are enrolled part-time or full-time. But a check of district websites and other web sources indicates at least 20 districts offer such programs.

At least 20 Oklahoma school districts offer fully online education, blended education or both. Some districts offer these options for K-12, while others offer them for grades 6-12 or just high school. The state does not track the number of types of programs.

Supplemental online courses have been available in traditional schools since at least 2010 and are required by law. But more students and parents are seeking full-time virtual education, and districts are reshaping their models to accommodate them.

The programs offer advantages over virtual charter schools because students retain access to campus amenities such as libraries, gyms, clubs, and sports and arts programs. This allows students to stay connected to their community, school leaders say. Students can customize a blend of online and in-person classes.

"It's about choice and what fits the kids," said Jay Rotert, director of Sand Springs Virtual Academy, which began offering a fully virtual K-12 program this year.

Some school officials say the trend is being driven by a need to stay relevant in a technological world. But another factor is Epic Charter Schools' drawing students away from district schools.

The question that nags these schools is the same one that troubles virtual charters: Is the quality of online education the same as that of in-person instruction? School officials aren't really sure.

A Need for Data

Steffie Corcoran, a spokeswoman for the Oklahoma State Department of Education, said virtual programs are governed by locally elected school boards, which still must meet state and federal standards. Districts aren't required to measure differences in success between partially or fully virtual students and traditional students. Many districts have only implemented their online programs in recent years and don't have the data yet to make comparisons.

Some districts, like Cleveland, are watching some metrics. This school year will be its first to offer a fully virtual program and the third for a blended program, which Superintendent Aaron Espolt said has been successful so far.

"We don't have a lot of data yet," Espolt said. "But our ACT results have been higher than they were in brick-and-mortar."

Some online programs raise questions. Their courses may rely on teaching done through curriculum systems like Odysseyware, which provides remote instruction by certified teachers not affiliated with the district. Many of the teachers are likely out of state. Other concerns have to do with whether certain students will fall behind or be tempted to cheat or take shortcuts.

Many districts have application processes that ensure both virtual students and their parents understand what is expected of them. They stress that online learning is not an easier path and students should be motivated. School officials say their learning management systems safeguard against cheating or plagiarism. Sand Springs Virtual Academy now requires online students to use their webcams and share their screens during exams to verify that they are the ones doing the work and not opening additional tabs.

Putnam City Virtual uses Odysseyware for its online curriculum. Cory Boggs, executive director of information technology, said that all online students are paired with a school counselor to ensure they are meeting all graduation requirements and keeping up with their grades.

"The district is in constant contact with these students as well," Boggs said. "We don't just turn it over to somebody else and say, 'Good luck,' but we are actively engaged in their education."

In a 2019 report from the National Education Policy Center, researchers found a "surprisingly low" number of virtual and blended schools with available performance ratings.

The report also advocates for more research on virtual and blended programs and other classroom innovations in traditional school districts. Overall, the more that students in both fully or partially virtual programs are in direct contact with teachers, especially in-person, the better.

"Children need to be seen and heard," said Dr. Gary Miron, a Western Michigan University professor who contributed to the policy center report.

Some Oklahoma school administrators said students in virtual programs appear to be succeeding at the same rate as their brick-and-mortar counterparts.

"If they're not meeting certain academic benchmarks, they're pulled in face to face. They don't get to stay on their own," he said. "So it's hard to say whether they're doing better because they're in the blended model, just because we have those safeguards."

Considering the policy center findings, officials at the nonprofit Cooperative Council of Oklahoma School Administrators decided to tackle the issue of online instruction in the state. After months of research, a committee of school leaders released a blended learning framework last month.

"It's kind of an open rodeo out there. We're trying to guide it with standards," said Derald Glover, who led the committee and is assistant executive director of the Oklahoma Association of School Administrators.

The framework emphasizes blended education because research has found problems with fully virtual education, Glover said. The framework isn't a strict model but sets standards and goals for things like teacher certification and student/parent involvement. Districts can adapt the framework to fit their needs.

"I think the framework really helps them do it right, because it's really important if you're going to have a virtual program that you're not leaving kids behind," said Putnam City's Boggs, who was on the framework committee. "Getting it right the first time is a big deal."

The cooperative council provided a resolution to districts for their local school boards to approve, which essentially endorses the blended learning model. As of right now, the council has received 25 resolutions, with more possibly coming in after monthly board meetings.

In the meantime, students are mixing and matching.

Sand Springs Virtual Academy is entering its ninth year, said Rotert, who became director two years ago. For the first several years, the program served mainly middle and high schoolers and averaged about 35 students; most took all their courses online. Last year, the program began with 23 students and ended with 148. Most now opt for blended schooling.

"They're doing a few brick-and-mortar classes, a couple virtual classes, playing sports," Rotert said. "We find a way to create a schedule that works for them."