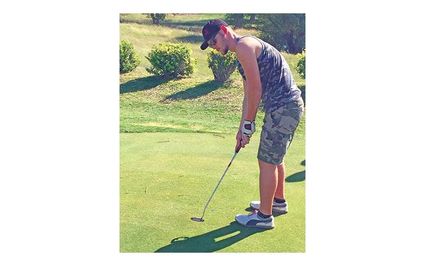 Myles Nixon focuses in on a putt.

This year the Freedom Booster Club held their annual golf tournament for a good cause.

On Saturday morning, Sept. 14, the booster club set out to Coldwater, Kansas, with more than 30 people – nine teams with four members on each team in an event called a four-man scramble.

Entries were $160 per team, $50 per cart and $100 to sponsor a hole. All money raised is to support Freedom School's athletics, which can include help with equipment, uniforms and meal expenses for students when they go to events for extra-curricular activities such as basketball and academic matches.

Golf teams consisted of some Freedom alumni, students and their families, and surrounding businesses like Cargill Salt, who bought two team spots. This event was and has been organized by the Nixon family for more than five years.

Freedom community and Booster Club member Jenny Nixon works hard to go out and find participants and hole sponsors, and even organizes the lunch for the participants with the help of Mona Kindsvater and Freedom School Superintendent Bryant Weber, who donated the pork for that day's lunch. Nixon also asked families of athletes to donate desserts for the teams to enjoy.

Team participants came from several cities in Kansas including Wichita, Dodge City, Greensburg and Coldwater. Nixon was able to recruit 13 hole sponsors from surrounding donors in the area, which creates a profit for the event.

Miles Nixon, a senior at Freedom Schools, is the only student who participated in the event, as his whole family has taken part in the tournament every year since they have organized it. Every team that participated ended up with a plaque, but the real winners are the students of Freedom Schools who have benefited from the booster clubs efforts.

This year was the Nixon family's last year in organizing the event, as their youngest, Myles Nixon, will be graduating in the spring of 2020.

"It's for the kids, and whoever takes over the fundraising idea after I'm gone; it doesn't have to be a golf tournament," said Jenny Nixon. The Booster club managed to raise over $2,200.

The next Booster Club fundraising event will be a taco pile-on luncheon at 11:30 a.m. and a dessert auction at 1 p.m. on the Sunday before Thanksgiving.