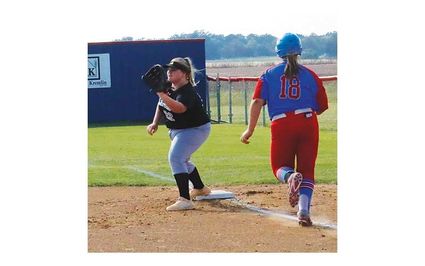 Ladybug Maddy Pettus secures the out at first base.

The Alva Ladybugs softball team fell behind early and couldn't come back in a 10-0 loss to Chisholm during Monday night's game. Chisholm scored three runs in the first inning and went on to secure their victory in the third inning when the team scored four more runs, pushing their lead out to 7-0.

The Ladybugs fell to 0-21 on the season. The Ladybugs have their next opportunity Thursday night on the road versus Perry High School.