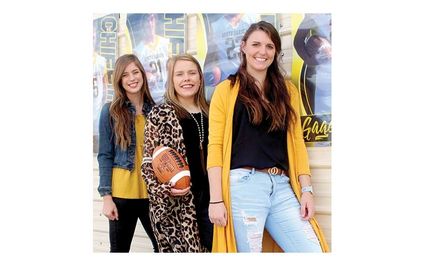 SB HOMECOMING QUEEN CANDIDATES – One of these senior women will be crowned the 2019 South Barber Football Homecoming Queen at a 6:30 coronation Friday evening: (from left) Adrienne Allison, Malayna McKitrick and Takira Blick.

This Friday evening one of three senior women will be crowned the 2019 Football Homecoming Queen at South Barber High School in Kiowa, Kansas.

The coronation ceremony begins at 6:30 p.m. before the Chieftains kick off the homecoming game at 7. They host the South Haven Cardinals.

Homecoming festivities begin in downtown Kiowa with a parade down Main Street at 2:30 p.m., followed by a pep rally in the Kiowa Auto Parts parking lot.

Adrienne Allison is the daughter of Kevin and Angela Allison. At SBHS she is Family, Careers and Community Leaders of America (FCCLA) president and also president of Student Council (STUCO). She is secretary/treasurer of the National Honor Society (NHS). She's earned her gold academic pin and was named on the Principal's Honor Roll.

Allison is part of the Lady Chieftains basketball and volleyball teams. She also plays in the band. She takes college courses in addition to her regular high school curriculum – additionally she does a work study at the Kiowa District Hospital. Her plans following high school are to major in nursing at Wichita State University with the goal to become an RN.

Takira Ann Blick is the daughter of Heather Blick and Justin Blick. At SBHS she is FFA president and vice president of both FCCLA and StuCo. She is a member of the NHS and earned her silver academic pin. She plays on the Lady Chieftains volleyball and basketball teams.

Blick is Cloverleaf 4-H president and 4-H Barber County Council vice president. She is swim team assistant coach and also first and second grade assistant coach. She serves on the Dodge Diocese Catholic Youth Council. She does a work study at Kiowa Consultants and plans to major in accounting at Sterling College where she will be on the swim team.

Malayna Renee McKitrick is the daughter of Ronnie McKitrick and Nadia Williams, and Brandy McKitrick. She is Miss South Barber and will represent her school in the Miss Cinderella Pageant in Alva during the NWOSU Homecoming Oct. 24-26.

At SBHS, McKitrick is senior class secretary and co-captain of the volleyball team. She is a member of FFA and the Yearbook staff. She is listed on the Principal's Honor Roll. Active in speech and drama, she's earned her way to compete at State Forensics and also State Festival.

At the Grace Bible Fellowship Church in Kiowa, McKitrick is part of the worship team.

McKitrick is currently in the Army National and plans to finish her advanced individual training next summer. Her goal is to become a military police officer. She plans to attend the University of Central Oklahoma and major in criminal justice with a minor in psychology.