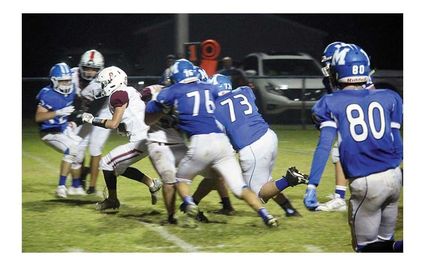 Mooreland Bearcats battled the Oklahoma Christian Academy Eagles (OCA) in what started as a barn burner last Friday night. The Eagles received the opening kickoff and set up on their 34 yard line. On fourth down the Eagles went for a first down but were foiled by an interception caught by Bearcat player Lance Bolar of Freedom. Bolar was brought down on the Eagle's 23 yard line. Three downs later, running back, Keeton Bowers ran the ball in for 6; the extra point was no good and the Bearcats lead 6-0.

The Eagles answered quickly with a pass caught by S'mauri Abram who broke tackles to the 20 yard line. A few plays later Eagle player Calvin Brantley scored 6. The extra point was no good, and the score was tied with 8:33 left in the first quarter.

The Bearcats recovered the ball on the 40 after an Eagles onside kick. Freshman quarterback Carter Sampson, who was in for the injured Dawson Frazier, scored quickly with a 30-yard run into the end zone. With the two point conversion, the score was 14-6 with Mooreland leading.

But the Eagles weren't finished, and they scored in the next offensive series with a long pass down field and a catch by Eagle player Xavier Sayler to put the Eagles on the two yard line. Three downs later Abram caught the ball for six; Noah Bosley caught a pass for two, and the score was tied again with 4:40 left in the first quarter. Both teams had a chance to score in the remainder of the first but the quarter ended 14-14.

The second quarter opened with the Bearcats having the ball. The Bearcats moved the ball, and on a QB keeper, Sampson ran the ball 25 yards to set up the team on the four yard line. Bowers number is called, and he mows over the Eagle line and scores. Bowers is called on again to carry the ball up the middle and the extra points are good for a score of 22-14. 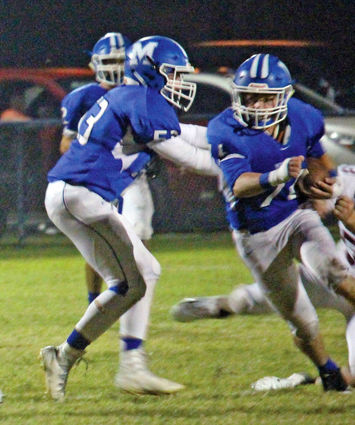 Lance Bolar (76) makes an interception in the first minutes of the game and sets up the Bearcats with 23 yards to go.

The Eagles tried to answer but their efforts were clipped by a Bearcat interception by Theo Sutton. The Bearcats went on to score but missed the extra point, and the score was 28 - 14 with 4:11 left in the half.

The Eagles made a charge when their player, Calvin Brantley, ran the kick-off back 75 yards for a TD. With 3:58 left, the score was 28-20. The Eagles were hoping for enough momentum to carry their defense to half-time but Mooreland will scored two more times before the half and they left the field with Mooreland 44 – OCA 20.

The Bearcats will play Texhoma Oct. 11 at Mooreland field beginning at 7 p.m.