Eagles fall to the Longhorns 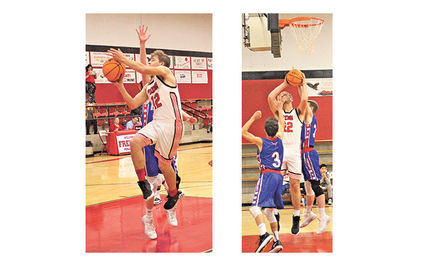 Left: Lance Bolar (12) twists and turns to lay up the ball for 2 points. Right: Myles Nixon (22) powers the ball past Darrouzett players Glenn Lambert (3) and Kyler Wheatley (23) and scores two.

The Freedom Eagles lost to the Darrouzett Longhorns on Tuesday evening with a score of 28 to 44. The teams battled hard in the first quarter and ended the quarter in a tie 6 to 6. The Longhorn made their shots (total of 11) in the second quarter leaving the score at half-time 17 to 11 with Darrouzett leading. 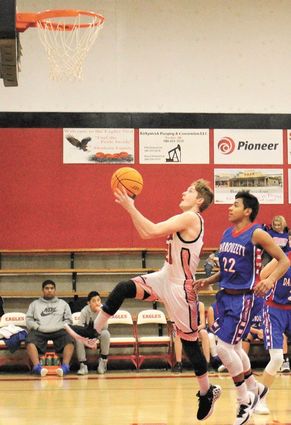 The Eagles failed to take care of the ball and turned it over 28 times. They went 0 for 7 shooting 3s. The Eagles were able to block five times and had 45 rebounds to the Longhorns 31.

The Eagles face the Sharon-Mutual Trojans this Friday following the Lady Eagles game.