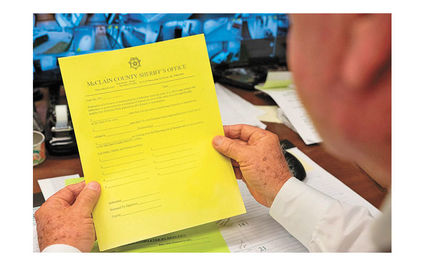 Oklahoma judges order hundreds of defendants to surrender their firearms under victim protective orders every year.

But the courts rely on defendants to voluntarily comply – an honor system that victim advocates and justice system officials say can put victims and the public at risk.

Judges can order defendants to surrender all firearms and other weapons by checking a box on page 5 of the victim protection order form. But there is no statewide procedure for what to do next.

McClain County Sheriff Don Hewett said his deputies ask defendants to surrender their firearms when the notice of the order is served. But deputies must rely on defendants to tell the truth about whether they own guns and how many they own.

"They could say 'no' when they actually do have firearms or they could surrender some of their firearms and our deputies don't know whether that's all of them," Hewett said. "We have to take them at their word. That's all we can do."

Victims request protective orders after they have been threatened or harmed by a family member, current or former intimate partner or roommate. The orders can be temporary or permanent and often restrict or prohibit the defendant from communicating with or being near the victim.

The protective order form issued by the judge includes a line to specify which law enforcement agency the defendant is expected to surrender the weapons to. The responsibility often falls to the local sheriff's office.

A search of state court records filed this fall revealed three protective orders issued by Special Judge Christopher Anderson in Hughes County that did not specify an agency. So even if the defendant wanted to comply, they wouldn't know where to surrender their guns.

Anderson and the Hughes County Sheriff's office did not respond to requests for an interview.

With no standards for the surrender of firearms, each agency is on its own, said Lloyd Cross, training director for the Oklahoma Sheriffs' Association.

In May 2017, a Washington County district judge ordered John Thomas to surrender all of his guns and ammunition to the county sheriff's office.

The order was part of a victim protective order filed by Thomas' ex-girlfriend. Thomas had a history of abuse and she feared for her life, according to court records.

Capt. Chad McCarty, of the sheriff's office, said there is no record of Thomas surrendering any guns or ammunition to the agency or the office making contact with Thomas after the order was issued.

"It's up to the person (defendant) to contact the sheriff's office to surrender firearms if they have any," McCarty said.

On Sept. 4, 2018, Thomas fatally shot his new girlfriend, Michele Mayes, with a revolver on the porch of her Ochelata mobile home after she broke up with him, according to Mayes' sister Melissa Lindgren. The protective order was still active.

All victim protective orders issued in McClain County – about a dozen per month – come directly to Sheriff Hewett. He personally reviews them and records them by hand in a thick book he has used throughout his 20 years as sheriff.

When an order arrives, Hewett sends his deputies to notify the defendant in person.

He attaches a bright yellow form to orders that specify a surrender of firearms; about 25% of them do, Hewett said. He developed the form to provide a record of each item surrendered and of defendants who deny they possess or own any guns or ammunition. Guns are stored in the agency's evidence locker until an order of release.

Through the association, Hewett trains other deputies on his process and even provides his personalized form. But it is ultimately up to each sheriff whether to use them.

There are 77 counties in Oklahoma and 77 ways of doing things, Hewett said.

Cross, of the Sheriffs' Association, said what works in a smaller county may not be feasible in larger metro areas where dozens of protective orders could be issued in a single day. And smaller counties may not have the resources to adopt new methods.

A Garvin County Sheriff vehicle is seen outside of the agency's office in Pauls Valley. Sheriff Jim Mullett said deputies ask defendants to hand over their firearms if the court orders it. But deputies have to rely on the defendant to comply. Whitney Bryen/Oklahoma Watch

Garvin County Sheriff Jim Mullett said his deputies go door-to-door asking defendants to surrender their firearms when ordered. He said many comply, but even under the best circumstances the system is flawed.

A Lindsay man was ordered to surrender his firearms to the Garvin County Sheriff's Office in September after his girlfriend said he threatened her with a gun, dragged her by the hair and hit her in the knees with the gun in front of their children, according to court records.

Mullett said deputies asked the man to surrender his guns, but nothing was turned over.

Defendants lie, Mullett said. Or they stash guns at a friend's or family member's house where they have easy access to them. They could borrow a gun, buy one off the streets or steal one. If they want a firearm, they'll get one, he said.

Defendants can be charged with violating a protective order, a misdemeanor, if they are caught in possession of a firearm. The penalty is a maximum $1,000 fine, a year in jail or both.

Thomas is serving life in prison for Mayes murder, and was sentenced to a year in jail for violating the protective order.

Tribal courts also can issue an order to surrender firearms as part of a victim protection order, but like non-tribal agencies, tribal police lack protocols for enforcing firearms prohibitions.

Shawn Partridge, director of the Muscogee Creek Nation's family violence prevention program, said the tribe is developing procedures to enforce orders to surrender firearms and other gun restrictions for abusers. The tribe is working with the National Council of Juvenile and Family Court Judges as part of the Firearms Technical Assistance Project, which aims to improve implementation of these laws in domestic cases.

"We're seeing more and more as far as weapons being involved in crimes of domestic violence, and the involvement of firearms," Partridge said.

Anna Marcy, director of the Choctaw Nation's family violence prevention program, said about half of the incidents that bring tribal and non-tribal victims in for services involve guns. But few protective orders in the 11 counties that the program serves include an order to surrender firearms, and even fewer defendants surrender voluntarily, she said.

Swinton said in one rural county a defendant who had surrendered his guns, returned to the police department and asked to get his rifle back for hunting season. The officer gave the man his rifle and told him to make sure he returned it when hunting season was over, she said.

Oklahoma is not alone in its struggle to enforce these orders, Swinton said.

"Apparently it's a problem around the country," Swinton said. "These judges are ordering it, but how do we make it happen?"

This summer, New Mexico implemented new legislation that requires defendants to surrender their firearms to law enforcement within 48 hours and added instructions to the protective order form for doing so. The law also requires law enforcement to submit a receipt of surrender to the court and lays out a policy for returning firearms to defendants if they are released from the prohibition.

Swinton called New Mexico's receipt policy a national model and said similar legislation may be filed in Oklahoma before the next session begins in February. Firearm storage is another hurdle that would need to be addressed in future policies, she said.