No injuries in three-vehicle wreck 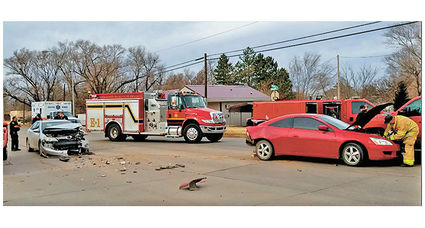 Three vehicles are damaged in this Wednesday, Dec. 4, collision on Oklahoma Boulevard. at Noble Street in Alva. No injuries were reported.

According to the Alva Police Department report by Officer Brian File, Emmarae Laik Cook, 22, of Alva, was driving a 2012 gray Toyota Camry eastbound on Oklahoma. For reasons unknown, Cook did not observe a 2003 maroon Honda driven by Chloe Marie Blubaugh, 19, of Medford, that was sitting stationary at the intersection attempting to turn north (left) onto Noble from the inside lane.